New transport system to run between Birmingham and Quinton along Broad Street and Hagley Road. 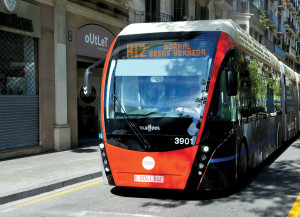 The Midlands’ first bus-based rapid transit system, featuring vehicles that look and operate like a tram but without tracks or overhead cables, could be running by 2016.

Sprint is being launched by public transport co-ordinator Centro, working with Birmingham City Council. Combining the capacity and speed of a tram system but with the flexibility, lower cost and simplicity of a bus. it will follow the No 9 bus route from Birmingham to Quinton, serving Birmingham’s entertainment quarter in Broad Street then along Hagley Road.

The scheme will be the first in the UK to have bespoke rapid-transit vehicles. Other UK cities such as Cambridge and York operate bus-rapid transit systems but using conventional buses.

Cllr John McNicholas, the chairman of Centro, said: “This is a completely new form of public transport in the West Midlands and we want to know what people think about the idea. It is a proven concept in other European cities and measures such as dedicated lanes, traffic light priority and limited stops will make Sprint journeys a fast and reliable alternative to the car.”

Sprint will be a fleet of up to nine diesel/electric vehicles whose features will include on-board real time information and ‘next stop’ announcements, low-level flooring and multi-door boarding for easy access plus onboard Wifi

The scheme will cost £15 million and is funded through Centro and by the government via Greater Birmingham and Solihull LEP. Subject to final approval by the LEP later this year construction could start in 2015, with Sprint going live 18 months later.

£50 million has also been earmarked to implement a Sprint route to the airport by 2021. This second route will link Birmingham City Centre and the airport (via Coventry Road), serving the proposed HS2 Interchange and Birmingham International station.

Numerous routes across the Midlands were studied by Centro for the pilot. Broad Street/Hagley Road was chosen because currently there are only two means of transport to Quinton from Birmingham – the bus and the car. Sprint would integrate with the existing bus network. Other factors were expected passenger demand, deliverability , the potential for economic development and reduced impact on the environment .

The proposal includes 16 new stops along the route from Colmore Row in Birmingham to Ridgeway Avenue/Hagley Road West in Quinton. It would also see road widening and a new bus lane installed in Hagley Road, and traffic light reconfiguration to give priority to Sprint vehicles. Following consultation and funding approval Centro will tender for the build of the Sprint vehicles, and for an operator to run them on Centro’s behalf.

Centro chief executive Geoff Inskip said: “Sprint is part of the vision we have for a world-class public transport system in the West Midlands. By offering a fast and reliable alternative to the car we believe we can get more people on to public transport, thus reducing traffic congestion that costs this region’s economy £2.3 billion a year.”

People can give their views on Sprint by filling in a questionnaire online at www.centro.org.uk by September 21.