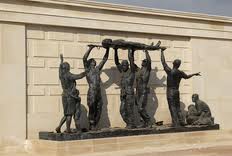 On the evening of 4 August 2014, the date which marks 100 years since Britain entered World War I, the National Memorial Arboretum in Staffordshire will hold a candlelit vigil on the Armed Forces Memorial to commemorate all who served and sacrificed during the War.

The moving service will include prayers, readings, music and poetry and will give visitors to the Arboretum, which is part of The Royal British Legion family of charities, a rare opportunity to explore its beautiful grounds in the evening.

It will also be a rare opportunity for visitors to explore the Arboretum’s grounds in the evening and to meet costumed interpreters; a WWI nurse, chaplain and an officer who will be on hand to talk about their vital roles during the war.

Managing director, Sarah Montgomery, said: “The Armed Forces Memorial lit by candles at dusk will be a particularly poignant sight. Everyone is welcome to join us to light a candle and remember the sacrifices made and the loss suffered by so many during the Great War”.