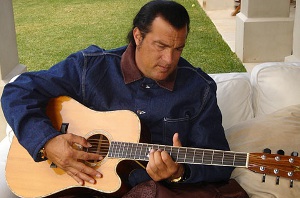 The show continues on Monday, and the week kicks off in a religious setting when hot jazz quartet the Backyard Music Boys play in the grounds of Birmingham Cathedral beginning at midday. At the same time Lithuanian vocalist Giedre Kilciauskiene plays St Paul’s churchyard in the Jewellery Quarter with her band Jazz Miniatures. Local heroes Bostin Brass perform at Sutton Coldfield’s Gracechurch Centre at 12.30 then Church Street Square in the city centre at 5pm. Also at 12.30 will be the first appearance of the Potato Head Jazz Band from Spain.

At 7pm the atmospheric surroundings of the Electric Cinema will provide a fitting backdrop to the 18-piece Bratislava Hot Serenaders from Slovakia (£15), then at eight the Robin in Bilston presents Hollywood action movie star Steven Seagal with his blues band (£30).

The Jazz Ramblers will be rambling around Birmingham Markets from 11am on Tuesday, then at 12 the Potato Heads Jazz Band will be in St Paul’s churchyard before moving on to the BCU Parkside building at 6pm. 12.30 sees another strand of the festival’s eclecticism in the form of award-winning cajun & zydeco band Elvis Fontenot & the Sugar Bees at the Brasshouse, then they play the Lord Clifden at 7.30.

Steven Seagal plays his second night at the Robin at 8pm (£30) while American singer Maysa, formerly with jazz funkers Incognito, performs at the Jam House at 8.30 (£8).

Wednesday kicks off with the New Orleans dixie quartet Kansas Smitty’s Big Four in Colmore Square at midday before backing Festival patron and veteran trumpeter Digby Fairweather at the Lord Clifden at 5pm. 7pm sees the self-explanatory Budapest Ragtime Band at Lightwoods Park, Bearwood, while the renown saxophonist Art Themen leads his quartet at the Lord Clifden at 7.30.

There’s a quality line-up of blues bands at the Roadhouse, Cotteridge beginning at eight and featuring the Grey Goose Blues Band, the Big Wolf Band, Looking Back, Melissa Knight-Davis and The Hold (£5). US roots singer Eve Selis is also at the Robin (£15) at 8pm.

Yet another nationality becomes represented on Thursday when the four-piece Saxitude from Luxembourg perform in the Cathedral grounds, moving on to Snow Hill station at five and the Junction, Harborne at eight. Returning to the festival once more is Becky Brine, who with her band the Hot Club of Stonehouse will be at the Mailbox at 12.30 and the Grosvenor Casino, Five Ways, at nine.

Fats Waller-influenced Italians Pepper & the Jellies will be playing at Pushkar, on Broad Street, at eight while blues pianist Mike Sanchez is at the Jam House at 8.30 (£8).

For full details of the festival and ticket sales call 0121 454 7020 or visit www.bigbearmusic.com