We expect mud. You have to in this, the winter of strange weather. But on the north escarpment of the Cotswolds, where the hill ends and the rich Vale of Evesham lies, spotted with flooded fields, the ground is dry. The paths are limestone, in some places as white as bone.

The late afternoon sky warms to the colour of peat whisky. It swims over the neighbouring hills – Bredon, Malvern, Dumbledon. And in the far blue north, are those the Clee Hills? 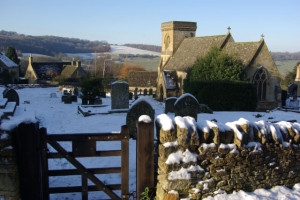 The sky changes. It can’t make up its mind. It is blue, it is rainy, it is flushed with clouds, it is empty and clear and then tinged with that golden whisky.

The Broadway Tower sits 900 feet above its town, the tidy town that tourists prowl. No-one ventures up the sharp escarpment except for us and a pair of stone masons repairing walls and pinning it to the earth. It’s Middle England’s version of those great expeditions of yore.

The hills are riven with hidden ravines and rills with muddy tracks and there is that white-boned limestone path that extends along the jutting twisting shelf of the escarpment. Along this, The Cotswold Way, it passes old places with old names: Pye Corner Coppice, Dor Knap, Beauchamp Clump, Five Mile Drive, Weston sub Edge. These are names that were dropped on to this bumpy land before the wool churches, before it was touched by electricity, before machines.

We don’t meet anyone. We take a turn here, a twist there, get lost by some gate. Mud sticks at our boots at a stile as if waiting to lure and trap people climbing over it.

Saintbury Church sits, silent, hovering above the hamlet’s houses strapped against the hillside. Its doors are locked in case someone runs off with its history, its stories.

Then a return to the car in this fading winter day: Shots of rain, a rush of clouds, a wind without the numbing cold, and the whisky sky emerging, once again, from the west.