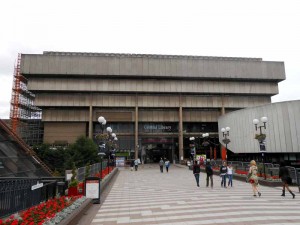 I wonder what John Madin would have thought about this week’s news that his library had been turned into a studio for the filming of a BBC spy thriller entitled The Game?

He would no doubt have been reminded that his Pebble Mill was abandoned by the BBC and demolished in 2005 depriving Birmingham of purpose-built TV studios that gave us the likes of Poldark, Dalziel and Pascoe and Vanity Fair. Perhaps that is where the BBC would have been filming if it had still been there.

On the other hand, he might have been philosophical about it. The empty building has been put to productive use; the Council has no doubt charged the BBC a commercial rent for the privilege, and the inside of the building will be seen by thousands if not millions of the nation’s viewers.

The owner of the building, Birmingham City Council, has been saying for years that it was ‘not fit for purpose’ and would be demolished as soon as the books had gone. There were of course some who agreed that it was not ‘fit for its purpose’ as a library, but its latest use as a film location proves that there is at least one other purpose for which it is fit.

Supporters of the Library go even further, and argue that there are many other uses for which it is fit. The council, however, has never made the effort to look for them. Museum Without Walls, is the latest book by well-known architectural critic, writer and film producer Jonathan Meades. He visits Birmingham to film for his TV series and likes it so much that he stays longer that he has stayed in any other city on his travels. He regards the buildings and spaces of cities like treasures in a huge free open-air museum.

Using the interiors of existing buildings as film sets rather that building them inside a special studio like Pebble Mull, takes this idea a stage further. Poirot may be filmed in Morecambe’s opulent art deco Midland Hotel that was once abandoned but which has been beautifully restored as a working hotel. The Ziggurat of the Central Library with its high-level windows and internal light well is an obvious location for a fictional and even perhaps, a real headquarters for MI5. Thus the boundary between truth and fiction becomes blurred.