The Artrix arts centre in Bromsgrove has some top names coming up this month.

Top concert pianist Mark Bebbington will be taking to the stage at Artrix on Friday 17th January to play a selection of classical favourites. The talented musician, who has previously played solo at Artrix and with the Coull Quartet, is now firmly established as a popular classical recording artist. His most recent CDs – which include four British piano concertos with the City of Birmingham Symphony Orchestra, have met with rapturous acclaim.

The event is being presented by Bromsgrove Concerts – a local organisation dedicated to promoting high quality chamber music. Mark will play a selection of pieces by Haydn, Schubert, Debussy and Alwyn.

Over recent seasons Mark has toured extensively throughout Central and Northern Europe as well as the Far East and North Africa. Within the UK, he has appeared in concerts with the London Philharmonic, Royal Philharmonic, the London Mozart Players and the Orchestra of the Swan. He has also featured both as soloist and recitalist on BBC TV and radio. 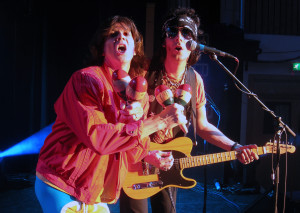 Then, packed with big hits, outrageous fashion and vintage guitars, tribute act The Counterfeit Stones will be taking to the stage at Artrix on Saturday 18th and Sunday 19th January. Described by Sir Mick as “the most famous Stones band in England” these seventies rockers have shared stages with Joe Cocker, Iggy Popp and Bryan Ferry amongst many others. The band has performed for Bill Clinton, Sir Tim Rice and at Buckingham Palace and yes, Satisfaction is guaranteed.

Finally, fans of sixties psychedelic rock are in for a treat when legendary band Jefferson Starship land in Bromsgrove as part of their worldwide 40th Anniversary Tour.

To celebrate their anniversary, the band, who hail from San Francisco, will be performing the classic Jefferson Airplane album Surrealistic Pillow in its entirety, together with a host of other great songs from their incredible career. The band is led by two of the founding members of Jefferson Airplane, Paul Kantner and David Freiberg. They are joined by drummer Donny Baldwin, guitarist Mark Aguilar and keyboard wizard Tom Constanten, a former member of the Grateful Dead. Last and by no means least, is amazing vocalist Cathy Richardson who portrayed the legendary Janis Joplin in the original Broadway cast of the hit musical ‘Love, Janis’.

The first San Francisco band to sign a major record deal, Jefferson Airplane were one of the biggest rock groups in America in the 60s and headlined the Woodstock Festival in 1969. Jefferson Starship was created in 1971 for Paul Kantner’s solo debut and prevails as one of the most critically acclaimed touring acts today.

Support comes from Dan Greenaway. A percussive acoustic guitarist, singer & songwriter, Dan has been likened to recent artists such as Newton Faulkner, Ben Howard & Ed Sheeran. He has made appearances at Glastonbury Festival and on BBC Radio 1 and Sky TV.

Jefferson Starship with Dan Greenaway are appearing on Wednesday 29th January at 8.00 pm. Tickets are £19.