Alan Clawley  reminisces about his youth and a golden era of local engineering.

When I was seventeen my dad, who wasn’t well off, bought me a Phillips Gadabout moped for my birthday. It had a 50cc two-stroke engine and pedals, but I passed my driving test on it, and that qualified me to drive the most powerful motorbike on the road. A few years later, when the moped had been run into the ground, I graduated to a 600cc Norton Dominator 99 de luxe by way of a 125cc James Cadet that needed a DIY rebuild, and a 350cc Matchless (pictured on the front page, me riding during the 1966 Exeter Trial). Other British bikes like the Triumph Bonneville and the BSA Rocket (literally) passed me by but I told myself they were too flashy for my taste.

Most of these machines were made in and around Birmingham. My moped was made by Phillips Cycles. Villiers engines were made in Wolverhampton. Harry James started his business in Sampson Road, Sparkbrook. Norton Motors also began life in Birmingham. The odd one out is Matchless, which was based in the far south in Plumstead

Why are most of these names now only seen in antique shops, transport museums and on the internet, where bikes change hands for thousands of pounds?

The story parallels that of the British car industry. Faced with growing competition from Honda and other foreign manufacturers, small British firms merged in a desperate effort to be more productive and benefit from ‘economies of scale’. Matchless merged with the Wolverhampton firm of A.J. Stevens who made the AJS. BSA of Small Heath joined up with Triumph of Coventry. Associated Motor Cycles combined AJS, Matchless, Villiers and Norton but it too went out of business in 1966 when Manganese Bronze Holdings bought it and made Norton-Villiers. BSA-Triumph didn’t last much longer and merged to form Norton-Villiers Triumph.

Triumph was offered a chance to survive when its Meriden workforce was encouraged by Labour Minister Tony Benn to form a co-operative to take over the ailing company. The inside story is well told by John Rosamond in his book Save the Triumph Bonneville (Veloce Publishing 2009). Rosamond was a welder from the factory floor who in 1977 was elected as  chairman of the co-op’s Workers’ Board of Directors, a post which he held with great skill and determination until the final closure of the factory in 1984. 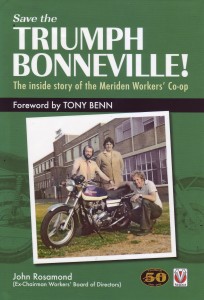 The right to use the Triumph name was bought by John Bloor who formed Triumph Motorcyles (Coventry). Its website today states that in 1990 six new Triumph models were produced. A new factory was opened in Hinckley in 1994 where the Bonneville was made again. In 2012 the company sold 50,000 new motorcycles.

The resurrection of the Triumph marque proves that British motorcycles were and still are very good. But I can understand how an industry with its roots in the late 19th century was badly shaken when, apparently without warning, Japanese bikes began to beat their bikes on British racetracks.

The conventional wisdom is that complacent management and the traditional antagonism between managers and workers was to blame for the industry’s slow and clumsy reaction to the new world. But the Meriden story also highlights the uncomfortable relationship between ‘capitalism’, as represented by the private financiers who toyed briefly with the idea of investing in the co-op, and ‘socialism’, which they saw as unwelcome government interference. This was too easily symbolised by the involvement of ‘socialist’ politicians like Tony Benn and Geoffrey Robinson, and the inept intervention of the Labour-held West Midlands County Council whose well-meaning officials and councillors had little or no direct experience of industry.

I recently passed an antique shop in Ashbourne which had a beautifully restored BSA Rocket motorcycle in the window. With a few grand to spare and a garage to keep it in I would bring it back tomorrow to live with me in Small Heath where it was made.