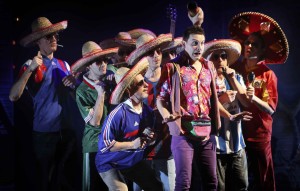 2014 sees the 450th anniversary of Shakespeare’s birth and to mark the occasion internationally acclaimed all-male Shakespeare company, Propeller, return to Coventry’s Belgrade Theatre with their adaptation of A Midsummer Night’s Dream and The Comedy of Errors on the Main Stage from Tuesday 11th-Saturday 15th February.

Their production of A Midsummer Night’s Dream has played to packed houses all over the world. In Shakespeare’s most magical play, love and illusion collide when two pairs of lovers become entangled in fairy mischief on the eve of a Royal Wedding. Dreams and reality become interchangeable and romantic chaos ensues. Seeing really is believing!

In Shakespeare’s smartest and most farcical play, The Comedy of Errors, two sets of estranged twins, separated at birth, find themselves in the same city 25 years later with hilarious consequences. A series of mistaken identities, assumed personas, and wild mishaps bring a family crisis – so complicated that time itself loses the plot – into heart-warming focus. Fortunately the audience is always one step ahead.

Propeller is an all-male Shakespeare company, so just as it was in Shakespeare’s day the action will be played out by an ensemble cast of all male actors. The company is renowned for mixing a rigorous approach to the text with a modern physical aesthetic and they have been influenced by mask work, animation and both classic and modern film and music from all ages.

The Belgrade Community & Education Company will also be marking the 450th anniversary of Shakespeare’s birth with its production of The Tempest, which will be performed by the Young Company. Running in the B2 auditorium from Monday 3rd -Saturday 8th March, the brightest of the Belgrade’s youth talent come together with a fast-paced, physical production of Shakespeare’s last play, created in association with Frantic Assembly.

Tickets for A Midsummer Night’s Dream and The Comedy of Errors are available now from the Belgrade Theatre Box Office on 024 7655 3055 priced from £11 to £25 or via www.belgrade.co.uk where cheaper tickets are available.

Tickets for The Tempest are free. However the Belgrade does ask for a donation to go towards supporting the work of the Community & Education Company.