From our roving reporter and hygiene editor Sir Howard Elston, who is travelling with British boss David Cameron in China.

A private parley with Downing Street top mandarins has revealed that England president David Cameron will take up Chinese citizenship in order to ease relations between the UK and his peers in Beijing.

He is in the Forbidden City now to create a “partnership for growth and reform” as he visits China on a trade mission.

In other words, he is sucking up to them. 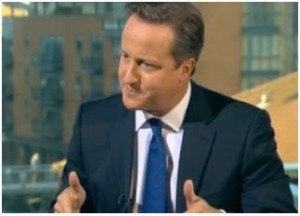 An insider told me over mai-tai cocktails and a chocolate mousse in the shape of The Great Wall: ‘Dave’ll do anything to get a second term.’

‘And since Beijing owns us anyway, he feels he might as well become a China passport holder so when they slap the deeds to our island on the table, he can continue his job.’

Our Dave arrived festooned with gifts as befits a vassal state. He has given South Northamptonshire Parish Council to the Chinese as well as Aston Villa’s reserve team complete with coaching staff.

‘The Communist Parry has always been fond of Northamptonshire as a socialist enclave and appreciated the gesture.’ my Man In The Know explained.  ‘As for Villa, my understanding is the offer is being rejected. They want a chunk of Liverpool.’

Other moves are in place to kindle closer ties.

the Cameron family will open a takeaway in Henley on Thames called  Sino-Fino Dining.

His wife Sam will leave her top job selling pens and will help with the week-end post pub crush for shrimp rolls and chips (wrapper left open).

The source added in a hush-hush top secret confidential knees up: ‘After the chippie is on its feet and he gets his passport, he will continue his makeover and rescind all civil liberties in England and those marginal swampy places attached to the  borders like Wales; declare war on a bunch of disputed Japanese islands; and invade Tibet.”

Prof MS Tang, from the Clydeside Institute of Far Eastern Despotic Affairs, commented as he regained his balance from under a table: ‘Cam wants to stay in Downing Street. By becoming a Chinese citizen, he knows he can depend on the Beijing vote come the revolution.’