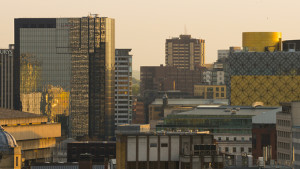 Birmingham’s reputation as a place to visit and invest continued to break new ground in 2013 with record visitor numbers and more jobs created by investors than ever, boosting its global profile.

The city’s hosting of the ICC Champions Trophy cricket tournament, the 4 Squares Weekender festival to mark the opening of the new Library of Birmingham, major industry conferences, an ever evolving foodie scene and its 13th Frankfurt Christmas Market all helped draw in the crowds. Visitors to the city are at an all-time high with 33.8 million visiting last year, an increase of 11% over the past six years.

Birmingham’s increasing popularity is attracting businesses as well as tourists. The number of foreign investments into Birmingham rose by more than half (52%) in 2012/13 to a record 41 investments. This created and safeguarded more than 4,000 local jobs. Global names including Deutsche Bank, Jaguar Land Rover and ASOS, along with Michelin star-winning restaurant adam’s, all invested in the city.

Destination of the Future

Birmingham has also been recognised by leading global investment experts, beating destinations including Colombia and the Czech Republic to be named ‘FDI Destination of the Future’ at the 10th Anniversary World Forum for FDI in November. The city was hailed as having the most potential to attract FDI thanks to its comprehensive support for investors, the scale of investment in its infrastructure and its talent pool.

Birmingham was also this month named one of the most competitive cities in the world for attracting inward investment, according to new research by global consultancy firm IBM and US investor magazine Site Selection.

The report – ‘The World’s Most Competitive Cities: A Global Investor’s Perspective on True City Competitiveness’ – ranked Birmingham 36th globally for its high quality business environment, and 43rd for its cost competitiveness. The report also highlighted the city’s attractiveness in a number of key sectors that Business Birmingham, the city’s inward investment agency operated by Marketing Birmingham, actively supports and promotes. The city ranked 29th globally for its strength in financial services, and 34th in software development.

Birmingham also overcame competition this year from London, Liverpool and York to be crowned ‘Best UK City’ for group travel and was voted the top events destination outside the capital by the industry-leading British Meetings & Events Industry Survey (BMEIS).

In the global spotlight

Birmingham’s growing investment and visitor numbers have been supported by work to boost the city’s profile nationally and internationally. Campaigns run by Marketing Birmingham have showcased the area’s culture, food, retail, heritage and investment opportunities in key markets including the US, Europe, India and China.

A resulting boost in the city’s national and international profile has been seen with positive media coverage reaching a new high. Valued at more than £16.5million for the year, this includes hits in influential titles such as New York Magazine, China Daily, prominent French newspaper Le Monde, German daily Berliner Morgenpost, and leading Spanish title El Mundo. Allied to an increasing presence in the UK media an immediate impact has been felt with traffic to the city’s tourism and business investment websites (visitbirmingham.com and businessbirmingham.com respectively) up by 1,314% from Italy and 561% from Germany.

“Birmingham is building an exciting future for itself as an exciting international city to visit, meet and do business. This is bringing unprecedented numbers of visitors, and significant levels of investment, into the region.

“Our challenge now is to build on these solid foundations and create a future proof offer for Birmingham. Sustained and ambitious investment into our infrastructure and transport networks, including New Street Station and the expansion of Birmingham Airport’s runway, are a good start and will extend our welcome to even more people and businesses in the coming years.”

Working together for success

Organisations across the wider region are now working in tandem to showcase the area across the globe. Overseas trade missions with national partners including VisitEngland and UK Trade & Investment (UKTI) took Birmingham’s messages to countries ranging from the USA to China and Spain.

“Partnerships are critical when selling Birmingham to the world. Growing collaboration between the business community, public sector and academia are helping to deliver tangible economic results for the city and we must develop this further.

“Throughout the year, we have been committed to providing key media and investment experts with a positive, first-hand experience of Birmingham. The feedback we have received paints an encouraging picture in our drive to attract even more new visitors, investors and events to the region.”

With the city’s global profile on the rise, Marketing Birmingham will extend its promotion of the city to include the wider area, following an agreement with the Greater Birmingham and Solihull Local Enterprise Partnership (GBSLEP), which confirms the organisation as the LEP’s strategic marketing partner. This will also enable the launch of a new tourism strategy from 2014-2020 to provide strategic direction for the wider region’s visitor economy sector.

Marketing Birmingham’s partnership with local authorities in the Black Country and Solihull has continued to deliver promising results as part of the three-year ‘Investing in the City Region’ project. Successes include a 21% increase in visitors to the Black Country since 2011 and 15 foreign investments in Solihull in 2012/13, creating and safeguarding nearly 2,000 jobs.