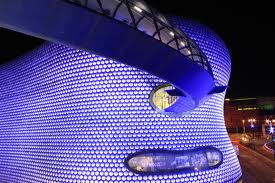 Birmingham now has a collection of buildings that mark a clear trend in the latest architectural style – showy ‘bling’. We were shocked when we first saw the pictures of the silver armadillo that was going to be Selfridges. We puzzled over the pixellations of the Cube. We are disturbed by the intersecting alloy rings on the Library of Birmingham and are amused to see ourselves and other buildings reflected in the sheets of stainless steel being wrapped around the ‘old’ New Street Station.

This is bolt-on architecture designed to grab our attention like a one-minute TV advert. Once we are inside the building its job is done. There we shop, read, eat or catch a train in an interior like any airport lounges or shopping mall around the world.

Are we to judge these wrappings as serious architecture rather than advertisements? How well have they been designed? What criteria can we apply to appreciate their quality?

The architect of the Cube has invoked randomness to suggest that a human has been involved in the distribution of its variously coloured cladding panels but it is just as likely that a computer was given the task.

As for Selfidges, anyone who has tried to wrap an awkwardly shaped present will understand how difficult it must have been to wrap its angular steel skeleton. Wrapping paper is not stretchy or flexible. If it has a regular pattern, such as silver discs on a blue background, it is impossible to keep the pattern intact and wrap the present at the same time. With sticky-backed plastic we can make the best of a bad job, but the architects of Selfridges had no such luxury. The shape they had to cover was completely irregular. The spacing of the discs had to be adjusted to follow the curves of its skin. The unhappy effect is noticeable when the entire façade is seen from a distance.

The rings of the new Library that cost £3 million, are said to represent a local metalworking industry that is not now capable of making them to the technical specification set by the Dutch architect. She makes wrapping easy by giving herself a strictly rectilinear building to wrap but she faced another design issue. The intersecting circle motif can be repeated ‘ad infinitum’ and the architect had to decide how to stop it at the edges and turn it round corners where circles had to be cut in half. The completeness and visual tranquillity provided by the circle is thus disrupted leaving a rough edge that looks as if it would give you a nasty cut if you ran your hand along it.

The ‘wrappers’ of New Street station faced the hardest task. Their ‘parcel’ was a sprawling 1960s shopping centre, an office block and a multi-story car park. Late in the day they had to work round a new John Lewis store. They made life easier for themselves by avoiding any pattern at all on their wrapping. Nevertheless, steel comes in sheets that had to be individually cut and shaped and stuck onto a complex steel frame bolted to the old concrete structure. Without computer-aided design such a project would have been impossible and even with it the installation process is hard work as nearly every sheet is different. The result is a visible patchwork, not the sleek, smooth aerodynamic skin of a high-speed train.

The purely decorative wrapping of buildings is not so cheap that when the novelty wears off, as it surely will, they can be re-wrapped. To my old-fashioned mind, functionalist modern buildings are perfectly acceptable without any added decoration.

One thought on “Birmingham bling”