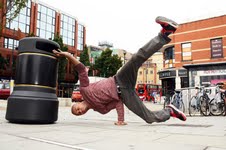 Wyre Forest District Council has launched a new campaign today, with the aim of reducing littered gum in the local area. Encouraging residents to ‘Bin it your way’, the council has partnered with the Chewing Gum Action Group (CGAG), an organisation chaired by Defra and funded by the chewing gum industry, to tackle gum litter in the UK.

The campaign, now in its eighth year, sees industry working with councils and BIDs to develop local initiatives to reduce chewing gum litter. Wyre Forest District Council is among 16 local authorities and BIDs taking part in the 2013 activity.

Results from previous years demonstrate the significant impact of the campaign on gum litter levels. Following 2012’s activity, gum litter levels fell by an average of 54% in participating areas, with some authorities reporting even better results. Cardiff Council reported a 93% decrease whilst Nottingham City Council and Coventry City Council announced drops of 88% and 85% respectively.

The new advertising campaign features professionally choreographed and highly innovative dance moves, encouraging gum chewers to dispose responsibly of gum litter in a fun and engaging way or face a fine of up to £80. The dynamic, brightly coloured adverts will appear in a range of locations across participating local authorities and districts, including roadside banners, bus stops, lamp-posts and telephone kiosks.

Cllr Marcus Hart, cabinet member with responsibilities for environmental services at Wyre Forest District Council said: “Chewing gum litter is a real nuisance that is costly and difficult to remove. We want the residents in the Wyre Forest district to be proud of where they live which is why we have partnered with the Chewing Gum Action Group to raise awareness and proactively tackle this problem.

“We hope that this campaign will encourage gum chewers to think before they dispose of their gum and understand that they can play a part in making the Wyre Forest district a clean and inviting place to live.”

CGAG campaign co-ordinator Kristian Bentham said: “Over the past eight years we have been extremely encouraged by the results of the CGAG campaign and we are looking forward to working with this year’s participating authorities to help create cleaner, more attractive places to live and work. We are committed to building on the success of previous years and hope to see a significant reduction of chewing gum litter in the partner regions.”