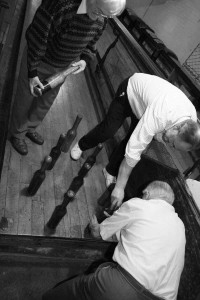 In 1906, following the failure of a proposal to build a tramway from Birmingham to Harborne, a group of housing reform advocates led by Quaker John Sutton Nettlefold, the first Chairman of Birmingham Housing Committee, purchased 54 acres of land comprising Poyners and Hill Top Farms (including the Moor Pool) for £15,860 and set about building a very forward-looking type of housing development. When Nettlefold and his colleagues conceived of the Harborne Tenants Estate (originally, and briefly, known as City Gardens), their aim was for tenants to progressively purchase shares in the company, eventually allowing them to own and manage the estate on a co-operative and democratic basis, with the directors receiving a maximum £6 annual remuneration. They envisaged an environment which would allow working people the chance to live, “in clearer air, with open space near their doors, with gardens where the family labour will produce vegetables, fruit and flowers (and) the people will develop a sense of home, life and interest in nature which will form the best security against the temptations of drink and gambling.” Nettlefold’s wife Margaret cut the first sod on October 26th 1907, and construction commenced the following January. Harborne Tenants’ first houses were opened on May 24th 1908, with the last of 500 properties completed four years later.

Recreational and sporting provision was high on the list of amenities provided for tenants, By the time that the estate was completed there were two sets of tennis courts, a bowling green and a gymnasium, which was later used as a rifle range, with a snooker room added in 1947. In addition, clubs for athletics, chess, cricket, cycling, football, gymnastics and whist had also been formed while there was (and still is) a theatre/community hall (home to the Moorpool Players) and extensive allotments. A fishing club was established in 1967.

Also provided was a skittle alley, opened in early 1911 and, from September 8th 1913, home to the Moorpool Skittle Club. The club joined the Birmingham and District Skittling League, whose membership included several clubs from the surrounding area, amongst them the Edgbaston Skittles Club and the Telegraph Skittles Club (both based at the Gun Barrels in Selly Oak) along with Chad Valley Skittles Club (most likely based at the Duck Inn, Harborne).

Both Moorpool and the Duck were dual alleys, rare enough specimens in themselves (only three other examples are known to survive), yet the alleys at Moorpool (and probably at the Duck too) consisted of both a traditional flat alley and a round one (i.e. cambered). Research suggests that these were almost certainly the only examples of round skittle alleys built anywhere in Britain.

With the Duck’s alley having closed sometime in the1980s (and since demolished, with the pub renamed the White Swan) Moorpool is now Birmingham’s last surviving purpose-built skittle alley (although skittles is also played at the Selly Park Tavern on Pershore Road, the venue was formerly a snooker room) and is set up for the ten-pin game, first introduced to Britain from the United States around 1860 and the discipline played in the Birmingham and District Skittling League.

For many years Moorpool was a men-only club, but it is now open and with a thriving Ladies section, Yet the decades-long repetition of names on the Moorpool Skittles Club’s honours boards suggests that it has never enjoyed particularly wide membership and few have achieved the club’s ultimate honour, the ‘Round Thirty’, the feat of demolishing all ten skittles three times in succession on the round alley. This is Moorpool’s equivalent of snooker’s 147 break or Frankie Dettori’s magnificent seven. It hasn’t been achieved for 18 years, and requires rare skill, given the bowling woods’ tendency to slide into the side gutter before reaching their target.

Both alleys (and exactly why two were constructed is a mystery) are 49ft long, 42in wide and made from a combination of maple and oak. The original flat alley (which, like the round, was waxed) was replaced in 2011 as the wood was rotting and the alley crumbling. The woods (made of Lignum vitae) come in three different sizes (5in, 7in and 8.5in diameter, weighing 3lb, 8lbs and 14lbs respectively), with many believed to be original, though the skittles need replacing approximately every ten years. The larger ball scatters the skittles more effectively but even on the flat alley is prone to veer sideways as it traverses the alley, while the smallest ball runs faster, holds it’s line better but causes less damage.

There are no signs to indicate the existence of either the club or the alley (which is both windowless and beneath street level) and although the Moorpool Estate (as it has been known since the 1990s) is now privately managed (rather than democratically run by its tenants) like Bournville, it remains dry, as per its Quaker roots. Thus, when the Moorpool Skittle Club members meet this week to commemorate their centenary, the glasses that they raise will be alcohol-free, so as not to impair their attempts to achieve a Round Thirty. Honest.