Southside businesses are being invited to dust off their watering cans and get expressive as part of the Southside ‘In Bloom’ competition which aims to beautify the area. 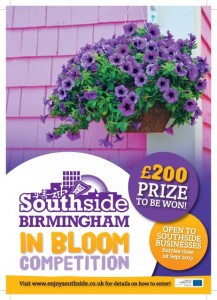 The district is on the hunt for the most green-fingered businesses and is encouraging all companies to bring their exterior to life by adding an eye-catching floral or decorative display. Each presentation will be assessed by a team of judges who will consider its creativity and the impact it has on the building and its immediate surrounding area.

Judges will consider the positive impact of each display and the winning business will be announced at the Chinese Autumn Festival on the 22nd September in The Arcadian. The successful business will win a £200 cash prize and certificate which will be awarded by Birmingham’s Lord Mayor as part of the celebrations.

Julia Chance, Southside BID manager said: “During the summer months I think it’s really nice to bring a little bit of the countryside into the city centre and we’re asking people to get creative and think outside the ‘flower box’ with their displays. 39% of businesses in the Southside district are offices and I strongly believe that by adding a touch of colour and life to their working environment can have a really positive effect on attitude and productivity.  We’d like as many businesses as possible to get involved and will accept all levels of presentations.”

To enter, businesses need to send their name, address and contact details to information@southsidebid.co.uk by the deadline 30th August 2013.