After more than 10 years of fundraising and development, Birmingham Conservation Trust has announced that work is starting on the city’s newest heritage attraction. 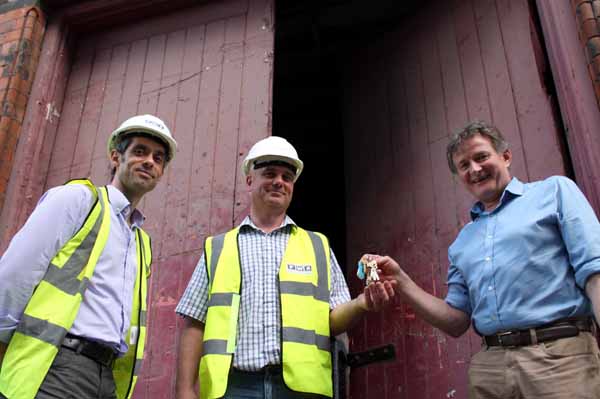 Yesterday, the keys of the Newman Brothers Coffin Fitting Works on Fleet Street in the Jewellery Quarter were handed over to specialist contractors Fairhurst Ward Abbotts, who will carry out the conservation of the historic factory.

By summer 2014, visitors to the Coffin Works will have the opportunity to experience the factory as it was in its heyday, with machinery working and its unusual products – coffin handles, coffin plates, coffin linings and shrouds – on display in the workshops and store rooms.

Birmingham Conservation Trust, who previously restored the Birmingham Back to Backs, bought the Coffin Works in 2010 with grant support from Birmingham City Council. Grants from the Heritage Lottery Fund and English Heritage form part of a package of funding that has made the conservation work and creation of the heritage attraction possible.

The Grade II listed Coffin Works was built in 1894 when Victoria was still on the throne and funerals were big business. Newman Brothers developed a reputation for making some of the finest coffin fittings in the world, and their products adorned the coffins of Joseph Chamberlain, Winston Churchill and the Queen Mother. It finally closed its doors in 1999.

Through more than a hundred years in business, the manufacturing processes and the way the factory was run changed very little. So, once the repairs are complete, visitors will step back in time into a different world.

One of the themes that visitors will be able to explore is the variety of funeral practices in different religions and cultures. Over the next few years, the Trust will also be working with the local community, schools and colleges on an ambitious programme to engage as many people as possible in what the Coffin Works has to offer.

As well as the visitor attraction, the rear ranges of the factory on either side of a courtyard will provide workshop and office space. These characterful spaces will be aimed primarily at creative and start-up businesses.

Fairhurst Ward Abbotts (FWA) have a strong conservation team and an excellent track record in heritage projects, including Tamworth Castle, Chatsworth House and Weston Park to name a few, as well as working within the Royal Palaces.  In 2000, FWA’s reputation and quality of craftsmanship earned them the very prestigious Royal Warrant as the Queen’s Decorators and Builders, which they continue to hold.

Simon Buteux, Director of Birmingham Conservation Trust, said:  “It is a fantastic moment to see the work actually start – so many people have worked tirelessly to get us to this point.

“I am confident that FWA are the right contractors for the job. They have the skills and experience needed and we’re looking forward to working with them.  They have entered fully into the spirit of the project and will be offering training in conservation skills for students from local colleges as well as ‘hard hat’ tours for schools.”

Chris Maryon, FWA’s Conservation Director, said:  “We are absolutely delighted to be extending our specialist conservation services to another wonderful building. My team are excited by the opportunity of being engaged on such an historically significant structure and we look forward to working closely with the client and design team to represent the Coffin Works for the enjoyment of many visitors who share our enthusiasm for the rich cultural heritage which, thanks to the HLF, English Heritage and other funders, is able to be preserved for generations to come.

“This project falls perfectly within our skill set for delivery by our own ‘In House’ directly employed crafts people and close supply chain partners who have enjoyed the privilege of working on some of our national treasures.”