Alan Clawley takes issue over the designation of an area  labelled  in need of  ‘regeneration’.

The term ‘regeneration’ is used these days to justify almost any form of commercial property development but, strictly speaking, a plot of urban land only needs ‘regenerating’ when there has been little or no economic activity on it for some time. A classic case is London Docklands, an area that lost its purpose in life when shipping was containerised and dock facilities moved downstream. Some redundant warehouses were bought by developers and converted to apartments, but large areas became derelict. Government-funded development corporations were set up to assemble land, ‘remediate’ it when it was polluted and create new ‘infrastructure, such as roads, sewers and, in London’s case, a brand new light railway. All this was meant to entice wavering commercial developers to commit their own capital to the area.

More recently this type of job was done by Advantage West Midlands (AWM) who bought and cleared land in Eastside, between the new BCU Campus and Lawley Middleway, that still awaits a developer.

The vacuum left by the abolition of AWM has been partly filled by the Greater Birmingham and Solihull Local Enterprise Partnership (GB&SLEP or LEP for short). One of its first actions was to designate 26 sites within a City Centre Enterprise Zone (EZ) that are in need of ‘regeneration’ and financial support.

One of these is Paradise Circus which already has a developer in place – a joint venture company between the City Council and Argent with the BT Pension Fund – waiting to ‘comprehensively’ redevelop the site. The LEP has, it seems, already agreed to ‘contribute’ £61.3 million to make the site ready by demolishing the existing buildings as neither Council nor developer can afford to do it themselves.

I was baffled at the choice of Paradise Circus as it doesn’t fit the normal profile of a regeneration zone. For a start it’s not an empty site at all. Until very recently it was occupied by the largest municipal library in Europe and was visited by 5,000 people a day. Whilst the council wrongly claim that the building is obsolete, they could hardly claim that the ‘library’ was obsolete since they have spent £200 million building a new one a short distance away. Paradise Circus is also occupied by a purpose-designed University School of Music with a 520-seat concert hall. There’s also a 200-bed hotel and two commercial office buildings and a wide range of shops, restaurants and pubs in Paradise Forum and Fletchers Walk. All of these economic activities would have to be removed and every building demolished before it will look anything like a site ready for regeneration. 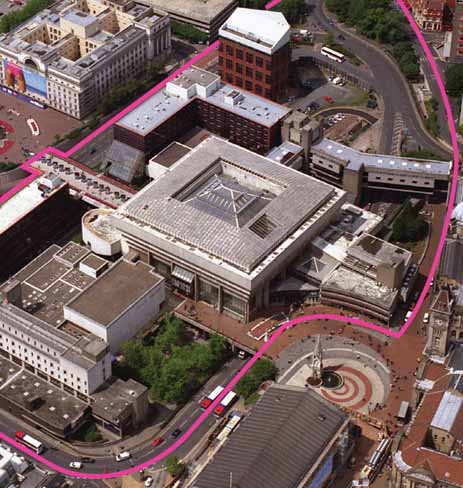 Simply replacing the present economic activity with something very similar – hotel, offices, shops and a concert hall – proves that the area didn’t need to be regenerated in the first place and what’s really proposed is little more than a style makeover.

When my article ‘Another quiet day in Paradise’ was posted on 15 June I had already been waiting 3 months for a reply to a Freedom of Information request. A letter from the Council dated 27 June eventually arrived. As expected, the Council told me that the terms of the Joint Venture Agreement were ‘commercially sensitive’ and its disclosure was refused on the grounds that to do so would be likely to prejudice the commercial interests of ‘any person’ (including the public authority) holding it.

In reply to my request for another document setting out the terms of the Council’s application to the LEP for £61.3 million, I was told that there is ‘no such document’ and that the LEP ‘identified, as part of its investment plans, projects within its Enterprise Zone which would benefit from its support, the Paradise Circus redevelopment being one such project’ [sic].

Finally, the letter explained that the breakdown of the proposed expenditure of the £61.3 million that I asked for is information provided to Birmingham City Council, and was done so on the basis that it was confidential. Quoting s41 and s43 of the Freedom of Information Act, the Council considered that the disclosure of the breakdown of the expenditure would cause ‘commercial harm’.

Only after it has been cleared of existing buildings and economic activities should Paradise Circus properly be considered for Regeneration Zone status and funding. To make grants ‘up front’ to enable the Council and its developer to achieve that status is, to say the least, highly questionable. £61.3 million could be spent on genuine regeneration projects now that are closer to fruition.

One thought on “Paradise Circus regeneration a scam?”