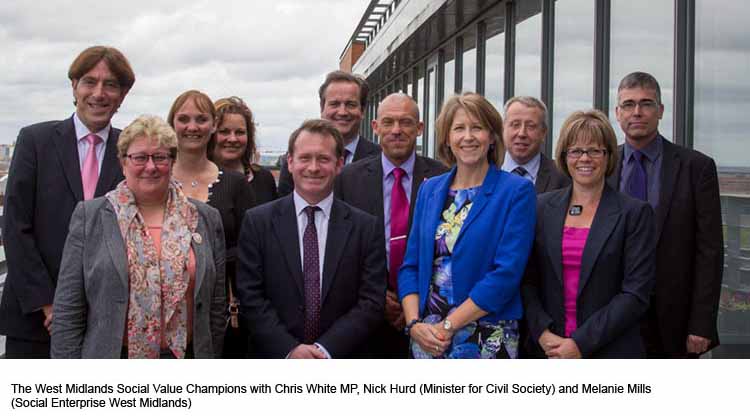 The Social Enterprise West Midlands (SEWM) event, held at Brindleyplace in Birmingham, urged more than 280 delegates to explore the opportunities the Social Value Act presents to them.

The Social Value Act – or the Public Services (Social Value) Act – to give its full name – made it law for public bodies to consider how the services they buy in can improve the social and environmental wellbeing of local areas, as well as achieve value for money.

The Act came into force in January and already local authorities from across the West Midlands have lead the way by appointing a Social Value Champion under the guidance and encouragement of Social Enterprise West Midlands.

These are individuals who are actively seeking to embed social value within their local authorities.

Keynote speaker, Nick Hurd MP and Minister for Civil Society, reiterated the Government’s commitment to the principles of the Social Value Act: “The Social Value Act has opened up a host of exciting and innovative social enterprise and investment opportunities.

“Every pound of taxpayers money spent has to work as hard as possible for our local communities.

“The West Midlands has a growing Social Enterprise sector, which is bringing this to life and helping to make this ground-breaking Act a success.”

Melanie Mills, Chief Executive of SEWM, was delighted with the turnout: “At a time when every penny must count and the importance of making enterprise beyond making people wealthy is important, social enterprise and social value offer a new way of doing business.”

“We passionately believe in this way of doing business and working together in partnership is essential to making the most of the Social Value Act.

“This is why we were delighted to introduce our Social Value Local Authority Champions.

Also at the event, SEWM announced a pilot that would see 10 social enterprises hand-picked for financial support in a bid to proactively increase their scope and size.

Social Enterprise West Midlands, which has recently been acquired by the Aspire Group, is a business network of over 400 members with a shared vision of growing the social enterprise sector.

It provides information, resources and networking opportunities for anyone interested in starting, developing or working with social enterprises.