Locals of the last pub on Walsall’s Beechdale Estate which raise thousands for local charities are fighting plans to convert it into shops saying it is at the heart of the community. 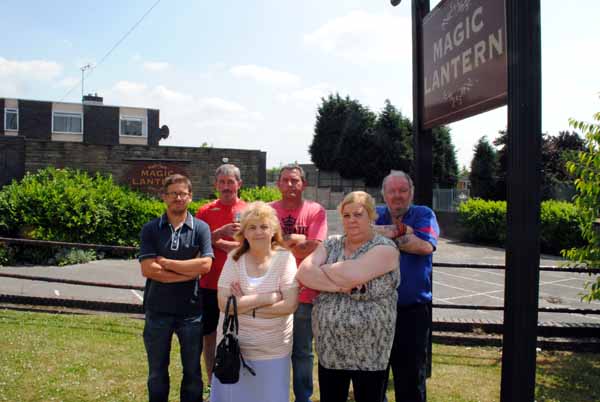 Campaigners trying to save the Magic Lantern on Cavendish Road have collected nearly a thousand signatures for a petition opposing the plan when it goes before council development bosses.

Locals say the Magic Lantern is more than just another pub.

Regular Jill Webster said the pub and its manager, Andrew Jenkins, gave so much to the community. “An over 60s luncheon club regularly meets there giving pensioners a place to meet their friends, while the  Magic Lantern FC get young people into sport and last year won the Cannock Chase football league.”

Manager Andrew Jenkins, who has run the pub for four years, said the regulars had made it a hub for local people. “It’s a fantastic family orientated pub. We never have any trouble because people feel they own it, they’re part of it.”

He added locals had raised thousands of pounds for good causes. “Last year we raised £10,000 for a local boy, 21 month old Tommy Brown, who lost both legs and an arm to meningitis. This Saturday locals are holding a fund raising event for Birmingham Children’s Hospital in memory of another local child, Abigal Alessi, who died of cancer. Andrew said: “The money we raise reflects the nature of the Magic Lantern and its importance to the local community.”

The campaign to keep the pub open is being supported by local Labour councillors who are asking Walsall council to reject the plans.

Cllr Tina Jukes said: “It’s well known that local pubs are closing at a fantastic rate because of the decline in the trade but here’s a public house that is thriving because it gives so much back to the community. It would be terrible if the Lantern were to close.”

The family themed event for Abigail begins at 4.30pm this Saturday with all monies going the Birmingham Children’s Hospital.