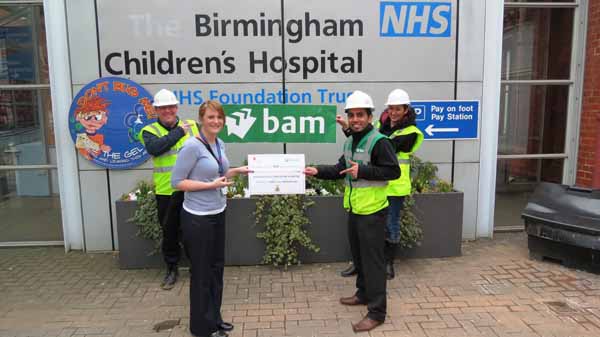 The money – generated from a dazzling range of activities from cake baking to marathon running – will be put towards the hospital’s children’s cancer centre appeal.

Assistant Site Manager Zahid Mukamam and Senior Project Surveyor David Watson set the team ambitious targets at the start of the project in July 2011. “We chose the hospital opposite the site as we wanted to have a positive impact on our neighbour”, said Watson.

“To encourage donations we did many different activities, including regular six-aside football matches, football scratch cards, a Euro 2012 sweepstake, a raffle of the meeting room’s TV at the end of the project, and weekly cake baking.”

The builders took the challenge to heart, donated over 500 Easter eggs to the children, growing facial hair for Movember and selling winter warmer hats and gloves on site. Senior Building Services Manager Carl Rushton ran the London Marathon in four hours and twenty minutes, raising £900 and the team took part in a dragon boat race raising £2,756.

BAM’s links to the Children’s Hospital go back to 2005 when it built the Burns and Educations Centre. It was behind Joseph Chamberlain College which won the Prime Minister’s Best Public Building Award in 2011.