Birmingham Airport has today published its response to the Airports Commission’s challenge to deliver aviation capacity in the long-term. 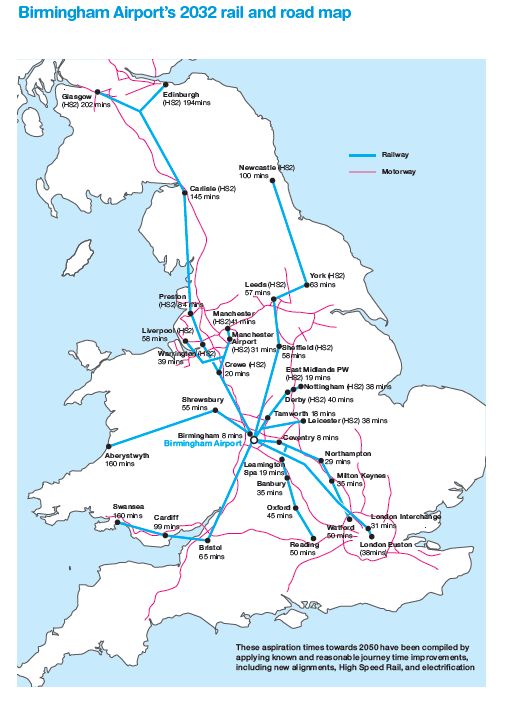 The detailed vision would cost under £7 billion to deliver and would be part of a networked national solution to the UK long-term aviation challenge.

The Airport’s submission to the Airports Commission, which is looking at how to best deliver aviation capacity for the UK, outlined incremental development, including the potential for more runway capacity to the east of the existing airport sometime after 2030.

The submission includes written endorsements from nearly 150 local businesses, LEPs, Chambers of Commerce and district councils who support the proposals. The Airport will be rolling out a local community engagement programme to inform communities about the proposals and hear their views over the autumn.

The current runway infrastructure has the capability of servicing 27 million more passengers. In the longer-term (from 2030), Birmingham Airport’s vision could form part of the solution that would maintain the UK’s global aviation status for the foreseeable future, providing capacity for at least 70 million passengers, and at the same time would protect and create employment growth.

A second runway would only be built when demand requires it and/or in response to Government policy, and in the longer-term – from 2030 – a new runway would be expected to dramatically lower the number of people currently affected by night noise.

It is estimated that by using the new runway for night flights the airport could remove over 13,000 people out of the 57dB night noise contour. This represents a reduction of 100% and would deliver substantial net improvements to the quality of life for local communities.

Paul Kehoe, Chief Executive of Birmingham Airport, said: “We believe that our proposal ticks all of the Airports Commission’s boxes. We have the potential to grow the Airport to eventually serve 70 million passengers – the equivalent of the size of Heathrow today – whilst reducing the number of people currently affected by night noise.

“What is more, people in the Midlands are united behind our proposals. Our submission has widespread support from stakeholders including the LEPs, local councils and local businesses. This is because people recognise that to grow local economies outside the South East and rebalance growth we need the direct international connectivity to encourage inward investment and support trade.

“We have recommended to the Commission a network of great long-haul airports to serve Britain’s great cities. Our proposals show that Birmingham Airport is in a position to sit at the heart of this network, serving a valuable catchment area and relieving pressure on congested airports in the South East.”

MD of MG Motor UK, William Wang, said:  “The UK manufacturing base is outside of the South East and, as a result, it suffers from a lack of direct air links with crucial long-haul markets like China. A Birmingham to Shanghai route alone would enable hundreds of business flights a year to operate, boosting the growth of British manufacturing and encouraging inward investment”.

Chairman of Purico companies, Professor Nat Puri DL, said in response to the launch of a direct service to Delhi in August: “The saving in time travelling to Heathrow is a welcome news. A direct flight to Delhi is much welcomed for the business, families, students and growing number of bilateral tourists. The route will give the Midlands direct connectivity with the growing number of Indian businesses keen to trade with the wider Midlands Region.”