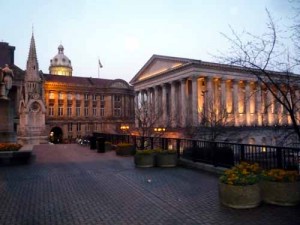 The singer-songwriter, who continues to pave the way in green touring practices and will donate 100% of tour profits to charity, visits Symphony Hall for one of just three UK dates on 12th September.

The prodigiously gifted saxophonist returns to the UK for a Jazzlines gig supported by Birmingham’s the Notebenders, and to mark the release of new album Be My Monster Love on 18th October at the CBSO Centre.

Jazzie B, Caron Wheeler and live band, back to life from playing a slew of festivals including Birmingham’s own Mostly Jazz, Funk and Soul, return to the city for a night of soul at Birmingham Town Hall on 15th November

Birmingham Town Hall saw its fair share of glam rock back in the day (T-Rex and Bowie being amongst the many who played there) and now the phenomenon returns on 16th December with two these giants of Seventies music.

St Patrick’s Day 17th March is marked with an evening featuring the influential singer-songwriter and band performing both separate sets and collaborations live on stage at Symphony Hall.

Prog-rock legends (Chris Squire, Steve Howe, Alan White, Geoff Downes and Jon Davison) perform The Yes Album, Close To the Edge, and Going For the One, in their entirety at Symphony Hall on 4th May 2014.

Tickets and more information can be obtained by visiting www.thsh.co.uk or calling the Box Office on 0121 780 3333