All the attention today is on the future of Birmingham International Airport but it’s interesting to reflect on its past when it was known just as Elmdon Airport, writes Alan Clawley. 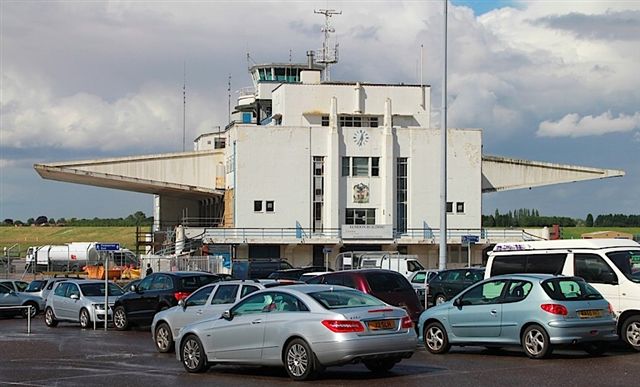 The futuristic pioneering municipal airport building was opened by HRH Duchess of Kent in 1939. The writer on architecture, Hugh Pearman describes it in his book, ‘Airports’ (2004). He wrote, ‘Birmingham’s Elmdon airport terminal of 1938-9 by architect Nigel Norman and engineer Sir Graham Dawbarn, possesses 15m (50ft) wing-canopies to either side of the round-nosed main structure. The idea was to provide shelter for passengers and baggage on their way out to one of two planes – typically the De Havilland Dragons, Rapides and Jupiters of the era, although larger planes were allowed for – drawn up beneath the canopies’.

Pearman compared the design with Templehof of the same date but far smaller and arranged entirely differently but noted that the Elmdon terminal, rather than being arranged parallel with the edge of the apron, as was the case with so many other European airports of the time, projected out into it at right angles, a peninsula into the airside’.  In a nice turn of phrase he described it as ‘a fat Mississippi steamboat of a building with wings attached’.

Air travel was slow to expand and only half a million passengers a year flew from Elmdon by the 1960s. An entirely new terminal building was opened in 1984 on the opposite side of the runway close to Birmingham International rail station and connected by a new road to the A45 near Junction 6 of the M42.

By 1996 the number of passengers flying from Birmingham in a year had risen to 5 million.

The 1938 terminal building, which can still be found at the end of the well-named Terminal Road leading off the Coventry Road, has survived intact and now serves the Freight section of Birmingham International Airport. It is a protected building and still in use, housing air traffic control and business charter offices. Birmingham Corporation’s coat of arms occupies pride of place on the white façade above the main entrance.