A pedalling professor and adventurous admin officer are set to make a big difference to Birmingham St Mary’s Hospice when they take on two exciting fundraising challenges later this year. 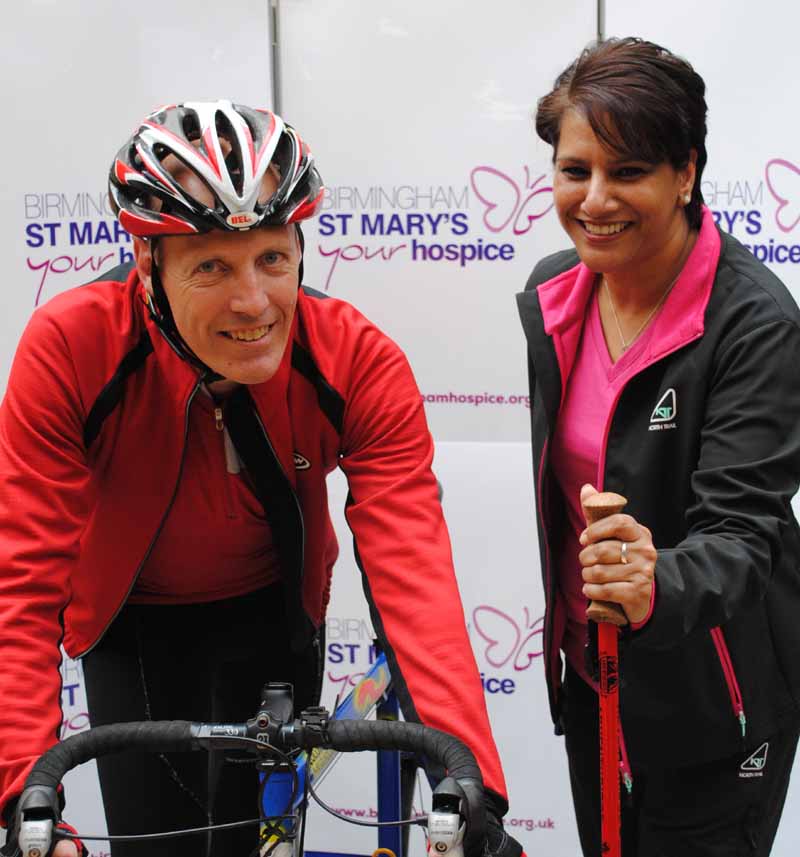 Professor Nick James and Usha Kiran, who are based at the Queen Elizabeth Hospital Birmingham’s world-renowned Cancer Centre, have signed up to support the hospice due to their contact with the charity in their respective work.

Oncologist Prof. James will be taking to two wheels when he cycles from London to Paris in July this year, whilst Usha is to join a group trekking in the Indian Himalayas before spending time volunteering at CanKids children’s cancer project in Delhi.

Between them, the two adventurers are on target to raise thousands of pounds for the Hospice, which cares for families facing terminal illness across Birmingham and Sandwell.

Some of the money Usha raises will go to the QEHB Charity’s Cancer Appeal in support of the state-of-the-art CyberKnife, which has recently been installed at the hospital and is set to revolutionise radiotherapy cancer treatment.

Prof. James, who is currently covering hundreds of miles per week in training for the event known as the Sunflower Cycle, said seeing the work of the Hospice had spurred him to give something back.

“In my work into researching better treatments for people with cancer, I also come into contact with people who have a terminal prognosis, so I’m very aware of the crucial palliative care that is provided by Birmingham St Mary’s Hospice.

“That’s why I’m really keen to support this important local charity. I want to do my bit to ensure that it is there for people who need its services,” he said.

Usha, who works as a clerical and admin officer in oncology and haematology, explained that her reason for supporting the Hospice and the CyberKnife appeal was simple:

“For me it’s all about the people. Like Prof. James, in my work I come across people who need these services, so I want to do what I can to help them.

“It’s also going to be very fulfilling to be helping those who don’t have access to the standard of healthcare we enjoy in the UK,” she said.

Usha added: “I have to admit that I am a bit nervous about the trek, as I’ve never experienced such a high altitude before but have been doing lots of hiking training to reach the best possible fitness before the challenge.”

Prof. James’ challenge begins on July 3 in London and ends under the Eiffel Tower in Paris four days later.

Usha heads to India on November 15, where she will travel to the Himalayan foothills near Dharamsala for four days of trekking before returning to the capital Delhi to help out at the children’s cancer project.

To support Prof. James fundraising effort go to www.doitforcharity.com/nickjames. Prof. James is also tweeting about his cycling exploits at @Prof_Nick_James.