Loyal ex-teacher Roland Holland celebrated the 30th anniversary of handing out a special trophy for talented musicians at Aldridge School. 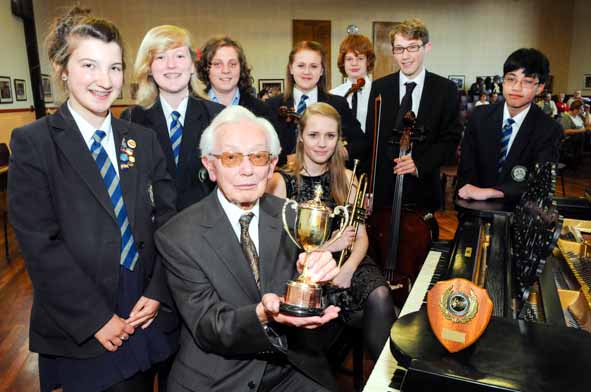 Mr Holland, who was one of the three first teachers at the school when it opened in 1957, has handed out the same trophy for the past 30 years.

Over the past three decades Mr Holland, who retired in 1983 from teaching French and music, has presented the award to the most talented senior and junior musicians in an annual music competition.

He said: “Aldridge has always had a very good reputation for its high standard of music and listening to the performers at this year’s concert was, as always, a delight.

“In fact I was thrilled to be joined on the judging panel by two former pupils Richard Sidaway, now a West End musical theatre actor and singer, and Jane Marlow, a successful musical director, as well as Neville Ellis, who has given a lifetime of service to Aldridge Youth Theatre.”

This year Jack Measham was awarded the Roland Holland Senior Award for his performance of Tarantella, by W.H. Squire, performed on the cello and Jonathan So won the Junior Award for his piano playing of a Berceuse by Frank Bridge.

Headteacher David Mountney said: “It was a real honour having Roland present this trophy and this year was particularly special because it was his 30th anniversary. We were also delighted to welcome back two former pupils, Richard Sidaway and Jane Marlow, who have enjoyed hugely successful musical careers after leaving Aldridge School.”