Birmingham City Council officials have written a report to the Cabinet stating that the 40-year-old Central Library building is not only vacant but ‘obsolete’ as well, reveals Alan Clawley. 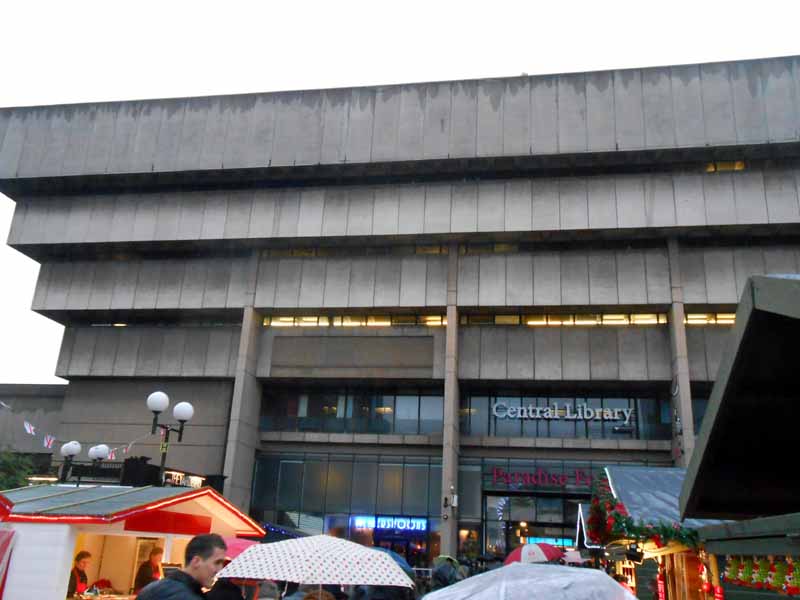 The Council’s latest attempt to write off the building is in a report by Peter Jones and Paul Knight of Birmingham Property Services asking Cabinet members at their meeting on 25 March to approve the making of a Compulsory Purchase Order by which all property in Paradise Circus not owned by the Council will be acquired for demolition. The report is entitled ‘case for Compulsory Purchase Justification for CPO action – legal requirements and Government 06/04 (“Compulsory Purchase and Crichel Down Rules”) [sic]

A 13-page appendix sets out more reasons why the Council believes that the Central Library in particular can’t be retained and used for another purpose. Over the years the Council has given many reasons for not wanting to retain the building, including ‘concrete cancer’. This latest report throws some new ones into the ring.  Thus, in rejecting the option of ‘minimal works leaving the area [presumably Paradise Circus] largely unchanged’, the report states:

The potential to convert to office or hotel space is very limited due to the building form and structure.

Note: Having referred to ‘the area’ as a whole the writer now focuses just on the Central Library. We know there is nothing wrong with its structure and its form is distinctive.

It is perceived that future office demand would be for Grade A offices in the best locations therefore this option was discounted as it will not achieve viability’.

Note: Other architects disagree. The floor plate of the Central Library is ideal for office use. Other buildings of a similar age, such as Madin’s 54 Hagley Road, have been successfully upgraded to Grade A.

Conversion to a hotel was tested and refurbishment costs suggest that such a development is not viable.

Note: No costs are given. It is merely implied that adaptation is more expensive than demolition and re-build.

Conversion to an art gallery or museum would require considerable expenditure and was discounted.

Comment: any proposal will require ‘considerable expenditure’ but that is no reason in itself to reject it.

There would also be significant lifecycle implications going forward with the existing building.

Comment: the lifecycle implication of demolishing a building clearly designed for a 100-year life after 40 years is ignored

This option [retaining the Conservatoire] would not utilise Louisa Ryland House and an alternative use or disposal would be required.

This will puzzle anyone unfamiliar with the Council’s proposal to re-locate the Conservatoire to Louisa Ryland House The writer appears to justify the demolition of the Conservatoire on the grounds that it will ‘utilise’ another building, a Victorian office block in Newhall Street, now vacated by Social Services. The writer foresees no problem with cost or lifecycle implications of adapting a 100-year old building.

The rental income forecast for this option [retaining all existing buildings] is insufficient to cover the cost of undertaking the refurbishment works producing a negative net present value. This option was discounted.

Note: No figures are offered but the writers again imply that refurbishment is inherently unprofitable. This was not the case with the Mailbox, Fort Dunlop and the Rotunda. The decision to refurbish would simply be reflected in the financial projections.

The need for compulsory powers suggests that the Council is in a hurry but that the owners of properties in Paradise Circus are not ready to sell their properties voluntarily. Since the scheme was given planning permission they have been pressured to ‘go along’ with the scheme and accept that their properties are only fit for the bulldozer. The Council’s dismissal of retention and refurbishment as an option can only devalue them and lower the amount of compensation the Council will eventually pay. Whilst this may be good for the Council it seems unfair on the owners of the properties affected. The Council’s lawyers still have to prove that there is a compelling case in the public interest for taking away their rights.