Birmingham Airport’s new Air Traffic Control Tower has been crowned ‘Project of the Year’ and won a further award for the best ‘Regeneration’ scheme at the 2013 RICS West Midlands Awards. 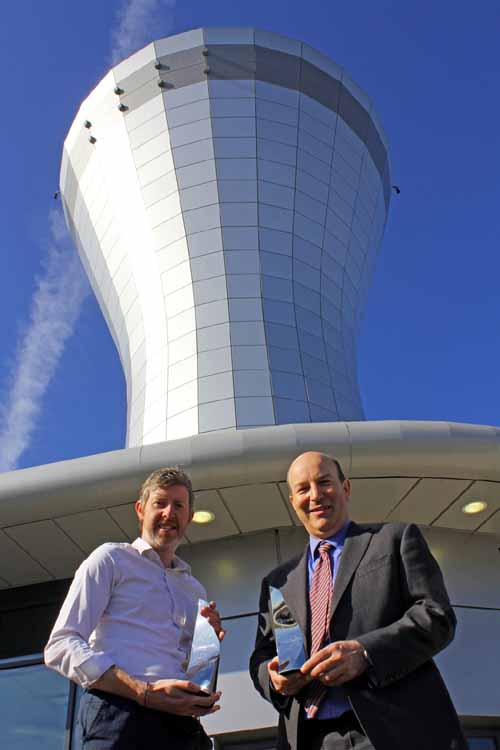 The Airport received the two gongs at a ceremony on Wednesday at The National Motorcycle Museum in Birmingham, where the West Midlands’ most impressive property schemes battled it out for an industry ‘Oscar’.

The prestigious annual contest celebrates inspirational initiatives in the land, property and construction sectors, and has recognised the important part that the Airport’s developments play in supporting the region’s economy.

The highly acclaimed Project of the Year title is presented to the scheme which demonstrates overall outstanding best practice. The Air Traffic Control facility at Birmingham Airport triumphed over what the panel of eight judges described as extremely tough competition, winning not only the overall title but also the ‘Regeneration’ category.

The stunning seven storey structure stands at 34 metres and has been an ambitious project in construction terms. Having been constructed without a supporting steel frame, it is one of the tallest un-stayed control towers in the UK. The tower’s strength and stability comes instead from a slip form concrete process, which involved the project team pouring concrete continuously for ten days while the cab was prefabricated off-site and installed.

Receiving the award on behalf of Birmingham Airport, Will Heynes, the Airport’s Development Director, said:  “We’re honoured to have won these two awards. The new ATC tower is a significant and vital investment that supports our vision to provide the Midlands with global connectivity, and a facility where airlines choose to operate and passengers prefer to fly from.

“It has rejuvenated the western part of the airfield and is an impressive, modern and iconic landmark for Birmingham that has triggered further development projects at this part of the site, helping to create new jobs and play a vital role in supporting the economic success of Midlands.”

Opened just in the last few days, the new ATC tower is equipped with state of the art radar and navigation equipment and gives Controllers better views of the airfield, above buildings that have been developed over the last few years. It will also allow them to see the end of the extended runway, a development that will be complete in early 2014 and will allow airlines to fly to more long haul destinations worldwide

Commenting on the facility, Chair of the RICS West Midlands Awards judging panel Roger Stone, a Chartered Surveyor and Land Agent, said: “Birmingham Airport’s Air Traffic Control tower ticked all the boxes for the RICS judges. This iconic building is part of a scheme that will bring business people to Birmingham and the West Midlands from parts of the world that we currently do not serve. The state-of-the-art control tower is at the centre of on-going works that will provide a huge economic boost for the region.”

The new £10m tower has replaced the previous 79ft facility that has been in use since 1939 when the original terminal opened.

Chris White, Group Director of CPMG, the project’s architects, said: “We’re delighted that the Birmingham Airport Air Traffic Control Tower has received this prestigious award, we are extremely proud of this iconic building which will be a significant part of the skyline for many years to come.”

The construction was delivered by Morgan Sindall.

The project will now automatically be entered into the national RICS Awards, where they will compete against other leading projects from across the UK later this year.