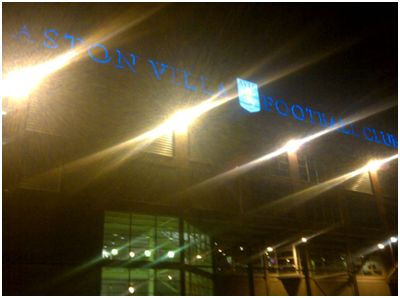 It’s been a few weeks since I’ve had the chance to put what used to be called pen to paper, and in that time a few unexpected things have happened. For a start Villa lost at Old Trafford. Didn’t see that one coming, did you?

Then, the next Monday night extravaganza saw Villa take on Sunderland, who must be in the forefront for some sort of record in getting rid of Martin O’Neill and finding a manager even more loathsome. I could talk about Paolo Di Cannio but it would just waste time before going onto the only thing that mattered. Aston Villa 6 (SIX) Sunderland 1.

I’d say this one came out of the blue, but it didn’t. Not totally, anyway. For some time we’ve been saying that Villa were going to hammer the opposition one day soon. Since the humiliations of January Villa have been playing well, sometimes getting results but being let down by daft mistakes. If the whole team fired, someone was going to suffer. Someone did.

You’ve seen the match, you’ve seen the goals. The most vivid memory is probably Matt Lowton intercepting the ball deep inside our half, running forward and delivering an inch-perfect crossfield pass for Andreas Weimann to smash in to the net. Or maybe Christian Benteke, as someone cleverer than me put it, jumping up high enough to see over the Holte End and check what the traffic was like on the Aston Expressway, then staying there long enough to head yet another of his many goals. One other memorable moment, and one that might prove more significant than any piece of individual skill, came with Benteke’s first. It might seem like a typical poacher’s goal, in the right place at the right time for a nod-in, but next time you watch it, look at the build-up and in particular how often Villa half-lost the ball only to win it back again. That’s the sign of a team whose workrate matches their undoubted skill.

It was one of the most memorable nights Villa Park has seen for a long while. Over 37,000 turned up, on a rainy evening when the match was on TV, and they provided an atmosphere that matched the scoreline.  Our supporters can be criticised, usually unfairly, but when it’s full and rocking there’s not many grounds that can match Villa Park for noise levels. And it came after Newcastle lost 6-0, so we amazingly went above them on goal difference. Who would have thought that?

Of course it would be daft to say that Villa are now safe. There’s already been a couple of setbacks when we’ve seemed set to put together a good run, but if the team can perform anywhere as well as they did on Monday night, Norwich at the weekend could see safety all but mathematically assured. To be able to go into the final two games of the season with no worries about going down would be incredible after what’s happened this season, but after a weekend like the one we’ve just witnessed, nothing’s impossible.