Pupils from Bournville School, Birmingham have unveiled a historic name for a brand new affordable housing scheme in Selly Oak on a former industrial site. 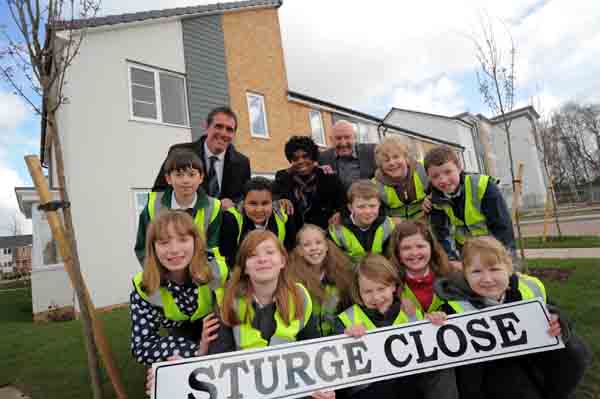 Situated close to the train station and University of Birmingham, ‘Sturge Close’ has been named in honour of the Sturge family, who were known for manufacturing potassium chlorate at the site for the safety match industry in 1793. Currently under construction, the £8.3m scheme is a partnership between Loughborough-based contractor and developer, William Davis Ltd; housing and care provider, Midland Heart; Birmingham City Council and the Homes and Communities Agency (HCA).

To help officially unveil the new name and street sign, project partners invited schoolchildren from the neighbouring Bournville School to join them on site.

Matt Colloby, group business development manager at William Davis said: “Inviting the Bournville school pupils to help with the official unveiling of the name is an acknowledgment of the integral role the local community has played in this scheme’s development. As the new homes and apartments really start to take shape, we look forward to witnessing their completion and helping the first families move in to Sturge Close!”

Comprising 71 new homes including a mix of two, three and four bedroom houses and two bedroom apartments, Sturge Close will be available for shared ownership and affordable rent. All of the properties will benefit from a canal side frontage to the Worcester and Birmingham canal and are being constructed to achieve Code for Sustainable Homes Level 3.

Graham Bettam, development manager at Midland Heart added: “We really wanted to ensure the local history of the site was still part of the new development and the future. Having Bournville school and partners involved in the unveiling of Sturge Close is fantastic.”

David Rhead, area manager at the HCA said: “It is great to see how our investment is helping make a positive impact in Selly Oak, delivering new homes in an area of high demand with good transport links. The site and surrounding area have been a centre for housing and employment for more than 200 years, as the street name recognises.”

Sturge Close is scheduled to be completed in July 2013.