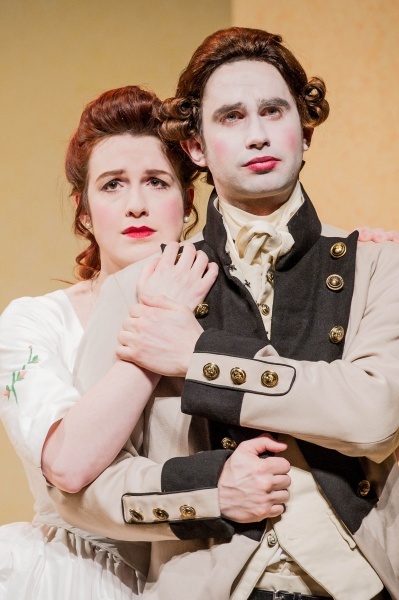 Or to put it into late 18th century Italian parlance  Cosi Fan Tutte – an expression that doesn’t translate into modern English very well but  sums up an age when it was expected that everyone- men women, servants, cads alike – were  out for themselves. All at it- Cosi fan tutte

Add Mozart’s  enchanting music and  you have an opera that has never lost popularity, its laughs, its lewdness and its darker undertones of moral emptiness.

The story is frivolous: two men seduce the other’s girlfriends as part of a wager. They women are ultimately aghast, the men both proud of their conquests but furious their girls were not faithful. They’re at it. Everyone. Cosi Fan Tutte.

ETO’s production offers a piece where the music seems like one long rounded song. Outstanding are supporting cast Paula Sides as the conniving maid Despina who helps out with the trick and  Richard Mosley-Evans as Don Alphonso as the amoral buddy who sets up the bet.

Set design is simple, handsome, blonde, almost Scandinavian. And so it should be as it is by Faroe Islander Samal Blak.

The rest of the cast entertains and performs  admirably in this touring production- they’re all at it. All excellent.

+Cosi Fan Tutte is on tonight. ETO also performs two other operas:  Verdi’s Simon Boccanegra and  Donizetti’s The Siege of Calais for the rest of the week at Warwick Arts Centre. Box Office 024 7652 4524