Hundreds of community members joined forces at The Public yesterday to demonstrate their support for the West Bromwich arts centre and highlight how valuable a building it is to them. 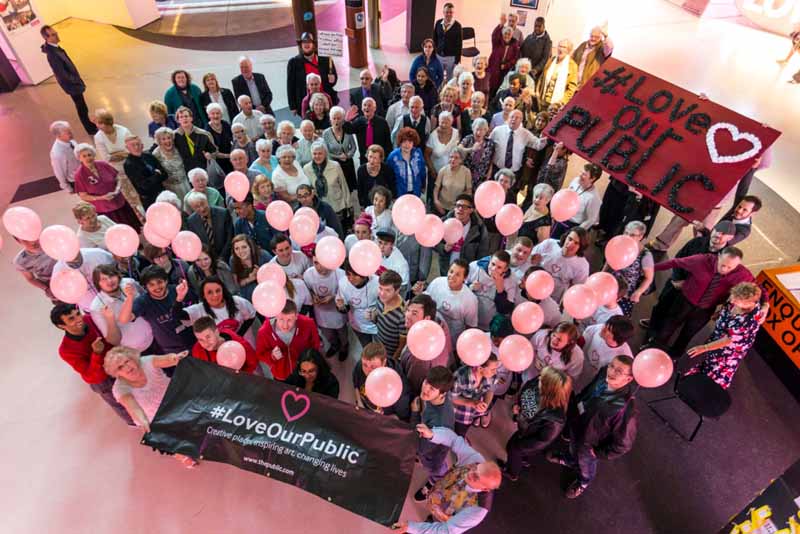 Since the announcement by Sandwell Council two weeks ago, that they were looking into alternative uses for the building, The Public have been inundated by messages of support from across Sandwell and further afield.  LearnPlay Foundation, one of the tenants within the building have launched a campaign, #LoveOurPublic, where members of the community can share their messages of support and sign a petition, which to date has received over 3000 signatures.  More information about the campaign can be found via www.learnplayfoundation.com/love-our-public.

Yesterday afternoon, regular users of The Public visited the building to voice their concerns about the Council’s proposals.  In attendance were representatives from the fortnightly Tea Dance, a group of digital apprentices from LearnPlay Foundation, together with tenants Carving Careers and Inquisitive Explorers.  Members of The Public Knitters group, Sandwell Adult and Family learning student, Michelle Bird, volunteer at The Public, Alan Bennett, Dutch design intern, Tim Mus, local comedian, Laurence Saunders and Grace Mayne from West Bromwich Writer’s Group were also present.

Linda Saunders, Managing Director of The Public said: “The Public is widely used by so many members of the community for such a diverse range of activities.  We’ve been incredibly encouraged and are extremely grateful for the genuine heartfelt messages of support received from across the borough, with so many people sharing with us, why they love The Public so much.”