Presented by Dan Aykroyd and Judith Belushi and featuring original members from the West End productions The Blues Brothers – The Smash Hit will be bringing the classic hits and capers of Jake and Elwood Blues to life live on stage at Coventry’s Belgrade Theatre from 29 Apr to 4 May. 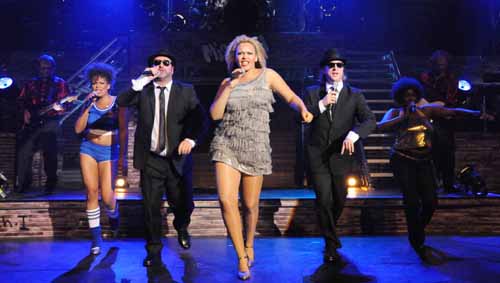 Last time round they smashed box office records, crashed, crooned and rocked their way into the lives of anyone with a heartbeat! Armed with new twists, new moves and freshly laundered suits, Jake and Elwood are on a mission to bring ‘Soul and Blues’ into the heart of the West Midlands.

Joining them onstage are the fabulous ‘Bluettes’; three sassy ladies with attitude and voices to knock you off your perch and an incredible Blues Brothers band.

As well as some new songs The Blues Brothers will be performing all of their classics – Everybody, Gimme Some Lovin, Think, Shake a Tailfeather, Sweet Home Chicago, plus loads, loads more.

So, dust off your pork pie hats, dig out your shades, put on your dancing shoes and get ready to shake your tailfeather ‘cos the Blues Brothers are back in town and request your company for a night of the best songs, music, moves, thrills and spills this side of Chicago.