Savvy students from Tile Cross have helped to secure funding from Birmingham Airport, in a bid to improve facilities at their school. 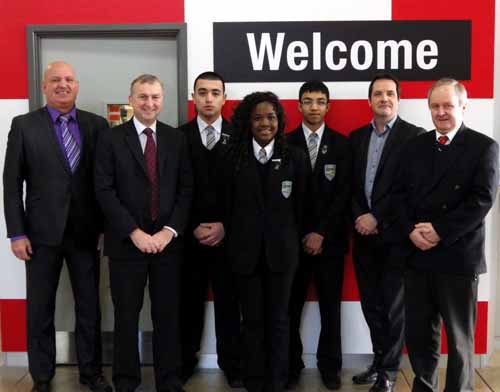 The Airport has pledged £30,000 to The International School in Tile Cross, thanks to a group of enterprising pupils who set out on a mission to improve teaching conditions inside the classroom.

Rondene Vassell, Babar Jamil and Nasim Wahid, aged 16, got their inspiration following a visit to the Airport back in April last year. After listening to Birmingham Airport’s CEO Paul Kehoe speak at an event inside the terminal, the plucky pupils approached him and asked why it was quieter at the airport than inside their own classroom, which lies directly underneath a flight path.

Thanks to their endeavour, Paul was able to advise the pupils about a scheme that was set up by the Airport to help insulate school buildings against aircraft noise.

After months of research and meetings with officials from the Airport and Birmingham City Council, who are also involved in the scheme, the pupils were rewarded by securing funds that will pay for double glazed windows and reduce the noise levels inside the classroom.

The Airport’s Schools Environment Improvement Scheme, which was introduced back in 1998, has invested almost one million pounds in schools that are affected by noise.

Councillor Ian Ward, Deputy Leader of Birmingham City Council and a Governor for the school, was extremely proud of what the pupils had achieved. He said: “This illustrates what great strides our school has made over recent years.

“Pupils are becoming more confident and we are developing very important skills to effectively analyse issues, communicate and present their ideas and to follow things through to a positive conclusion. We are all proud of what these pupils have achieved, not just for the school, but for their community too.”

Mark Garside, Head Teacher at The International School, was also delighted with the contribution his pupils had made. He said: “We have some very talented pupils at this school. Through the work this group has done, all present and future pupils will benefit from improved teaching facilities. They will leave a very positive mark on our school.”

Andy Holding, Community Affairs Manager at Birmingham Airport, added: “Supporting our local community is extremely important to us. We are delighted to help The International School by making a contribution towards new windows, which will reduce aircraft noise levels and improve teaching conditions as a result.”