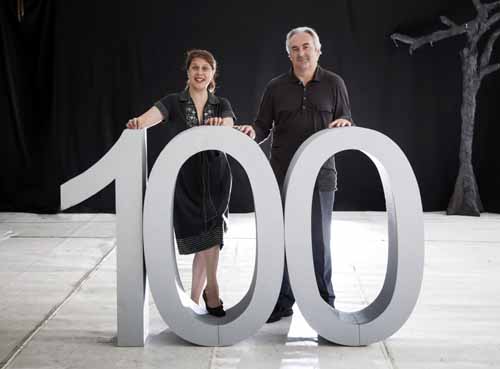 Autumn and Winter 2013 is Roxana’s first full season at The REP and also marks the reopening of the theatre’s Broad Street home following its two-and-a half-year closure for major refurbishment.

The REP reopens to the public on Tuesday, September 3rd with a new 300-seat studio theatre – created through the partnership with the new Library of Birmingham – as well as the restoration of its original façade, plus much improved public and backstage facilities.

Silbert, said: “This is an historic occasion and I’m thrilled that we are back home after two and a half years working off-site. We are reopening the theatre with an exhilarating season of classics, new work, great hits, fantastic names, an extraordinary range of local talent very  keen to perform at The REP and some brilliant collaborative and contemporary theatre making.

“Thanks to the restoration, the theatre looks as striking as it did when it first opened in 1971. Our new Studio space, which is shared with our new next-door neighbour the Library of Birmingham, provides us with a beautiful and essential 300-seat auditorium. And visitors will be able to enjoy our rejuvenated public spaces, including the stylish new Centenary Bar & Brasserie, run by our partners Searcys who are responsible for the St Pancras Champagne Bar and the restaurant at the National Portrait Gallery amongst many others.

“It is fitting that we open a renewed and revitalised theatre in the very year we mark the centenary of the company’s founding by my visionary predecessor, Sir Barry Jackson.

“Sir Barry was a remarkable man and his brave artistic vision put Birmingham firmly on the theatrical map.  I want to bring that vision forward into the 21st century and ensure The REP honours him by being one of the best theatres in the country. Our season champions new work, nurtures local talent, collaborates with theatre companies both in the UK and overseas and, I hope, creates great theatre that is well and truly made in Birmingham.”

Opening the season in the main auditorium will be the National Theatre’s production of Alan Bennett’s latest play, People (3 – 21 September).  Directed by Nicholas Hytner, this immensely popular show starts its UK tour at The REP following a sell-out run at the National.

The first production in the new Studio will be the world première of The Legend of Mike Smith (12-28 September), written by and starring the Birmingham born MOBO award-winning musician Soweto Kinch.  Bringing to life Soweto’s latest album of the same name, this absorbing new play tells the witty story of an aspiring musician’s struggle to succeed, through Soweto’s music played live and with choreography by leading hip hop supremo, Jonzi D.

A world premiere is also the first production in The Door. One of the most exciting young poets and writers working in Britain today, Kate Tempest, presents her new play Hopelessly Devoted – A Love Story of Extremism (19 September – 5 October) in a co-production with Paines Plough. Following its premiere the play will also tour regionally and nationally, with support from the Sir Barry Jackson Trust.

Roxana Silbert’s acclaimed production of David Grieg’s Dunsinane (24 – 28 September) will be the second production in the main auditorium. This exhilarating “sequel” to Macbeth, co-produced by the National Theatre of Scotland and the RSC,will star Siobhan Redmond as Lady Macbeth.

Following this will be a brand new production of Twelve Angry Men (4 – 19 October) starring Birmingham born actor Martin Shaw, in the lead role.  This phenomenal play, as hard hitting and vital as it was sixty years ago,will transfer to the West End following its opening in Birmingham.

A Passionate Woman (21 – 26 October) by the BAFTA award-winning writer Kay Mellor visits The REP as part of a UK tour.  Touching and heartfelt, this comedy about a shattering family secret stars favourite actors Lynda Bellingham and Christopher Timothy.

Making his debut appearance at The REP, Mark Williams, Birmingham born actor and star of the Harry Potter films, the BBC drama Father Brown and comedy series The Fast Show, will appear in Moliere’s Tartuffe (1 – 16 November) directed by Roxana Silbert. This new version by Chris Campbell will transport Moliere’s famous comedy to the modern-day West Midlands.

For Christmas, The REP’s Associate Director, Tessa Walker, directs a new staging of Bryony Lavery’s adaptation of Dickens’ A Christmas Carol (27 December – 4 January), which proved very popular when The REP premiered it in 2009.  The Christmas season also sees the welcome return of the family favourite, The Snowman (8 – 18 January).

The UK premiere of Europa (16 – 19 October), a satirical and savage snapshot of European life, will be the second show in the new Studio. A collaboration with partner theatres in Europe, Europa is the result of a two-year EU-funded project that has seen the UK writer Steve Waters researching and co-writing the piece with fellow writers from Germany, Croatia and Poland.

The debut season in the new Studio will also see work from ATC with the premiere of David Greig’s latest play, The Events (19-23 November) inspired by the Anders Revik killings in Norway. The production will feature local community choirs.

The REP’s opening season won’t just be restricted to shows in its three auditoria. In October, the theatre’s new hospitality suites will be the setting for Interactive International Theatre’s rip-roaring Faulty Towers – The Dining Experience (24 – 28 September) – an interactive show in which audiences are treated to a three-course meal hosted and served by Basil, Sybil and Manuel.

The REP will also present the Best of BE Festival (15 October) featuring the work of four companies whose productions featured in the international BE Festival, and a new piece by local actor Bernadette Russell – 366 Acts of Kindness (17 – 21 December) which explores the effect of one woman’s decision to undertake one act of kindness every day for a year, and Zhe (15 – 16 November) by Collective Artists.

Stan’s Café The Anatomy of Melancholia (7 – 9 November), an adaptation of Robert Burton’s 17th century book,will be part of the Bedlam Festival, a series of events related to mental health presented in partnership with the Birmingham & Solihull Mental Health Trust that will also include performances of Mess by Caroline Horton (1 – 2 November).

The new Library of Birmingham will also feature as a setting for a REP production. The final part of The REP’s two-year Neighbourhood REP project will see performances in the children’s library of a new storytelling piece, Yumm-a-Yukk-a-Boo (30 Oct – 2 Nov) by Vayu Naidu created through work with children and senior citizens at the community library in Ward End.

The first theatre offering for the REP’s Children babies, who were born in Heartlands and City Hospitals during The REP’s 100th birthday week this February, will be Open House (22 – 30 October) offering the perfect introduction to the theatre this interactive and multi-sensory production in The Door will be for children aged 0 to 2 years.

The REP’s reopening Autumn and Winter 2013 Season goes on sale to members on The REP’s 100th Birthday on Friday 15 February and to the general public on Friday 22 February. Box Office: 0121 236 4455 Online booking: Birmingham-rep.co.uk