Ikon Gallery hosts a number of events next month to mark the 15th anniversary of its move to the former Oozells Street School in Brindleyplace, including a special talk with historian Dr Chris Upton. 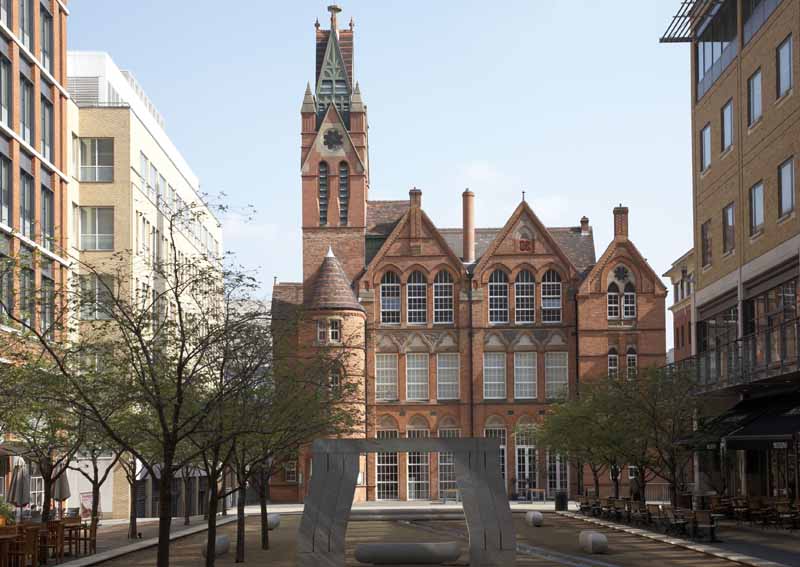 Formally opened in March 1998, Ikon Gallery formed a major part of the redevelopment of Brindleyplace estate which took place following the opening of the ICC in 1991.

The dramatic gothic building had a long history prior to Ikon’s move.

Oozells Street School was built in 1877, a product of the 1870 Education Act which led to an explosion of new schools throughout the country. It was built by architectural firm Chamberlain & Martin, the former being John Henry Chamberlain who was also responsible for the School of Art in Margaret Street and Springhill Library in Hockley. At this time the area now known as Brindleyplace was a crowded scene of small industrial works and back-to-back houses.

The building continued to operate as a school until the late 1960s. For the following thirty years it had an eclectic identity, at times housing a theatrical costume hire department and a road tax office and at others standing empty and vandalised, losing its original tower to disrepair. In 1981, having been granted Grade II listing, Oozells Street School was preserved ahead of the regeneration of Brindleyplace.

At this time Ikon, founded in the early 1960s, was outgrowing its venue in John Bright Street. By moving to Oozells Street School it returned the building to its original heritage as a place of learning and inspiration. Funded by one of the first national lottery capital grants, a significant conversion programme preserved the outside shell of the Victorian school, rebuilt the tower to its original design and added a glass-encased scenic lift and stairway. What were once large linked classrooms are now spacious galleries showcasing the best in international contemporary art. Doors opened to the public on 21 March 1998.

Debbie Kermode, Deputy Director, Ikon said: “I vividly remember the day we opened and the excitement felt by everyone. We welcomed a star-studded guestlist including Janet Street-Porter, Neil Tennant, Antony Gormley and Michael Palin. Clare Short MP for Ladywood cut the ribbon to the new Ikon and the party continued late into the night at No.1 Brindleyplace, then a vacant property and now home to Deutsche Bank.”

Ikon marks this anniversary with a special event on the evening of Thursday 21 March, exactly 15 years to the day it first opened its doors to the public in Oozells Street School. At this event we reflect on the redevelopment of Brindleyplace and the changing landscape around Ikon’s current home. Speakers include historian Dr Chris Upton and Gary Taylor, Executive Director, Altitude Real Estate. Places are free but should be reserved by calling Ikon on 0121 248 0708.

Join in for an informal walk exploring Brindleyplace and the surrounding area led by Dr Chris Upton who’ll be looking at the social history of the site – and its contemporary focus on business and leisure while also uncovering hidden treats. Places are free but should be reserved by calling Ikon on 0121 248 0708.

Get involved: upload your photos of Ikon Gallery and Brindleyplace to www.flickr.com/photos/ikon-gallery