Birmingham based Teasel Theatre Company will be bringing their highly acclaimed children’s production Grisly Tales From Tumblewater to The Public on 23 March. 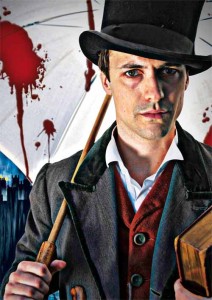 Part of Theatre Fever, a two week celebration of West Midlands made theatre, Grisly Tales From Tumblewater follows the story of a determined orphan and his satchel full of spine-chilling tales.

Dickens meets Roald Dahl via Horrible Histories with laughs, frights and live music, the magical theatrical show has been described as a ‘must see’ by The Stage, and ‘a beacon of light-hearted pleasure’.

Edward Jaspers (co-writer of Hamlet! The Muscial) performs in this rip-roaring one-man adaptation of Bruno Vincent’s deliciously dark novel, which itself was nominated for a 2010 Waterstone’s Children’s Book Award.

Theatre Fever is a celebration of theatre made in the West Midlands, performed right across the region.  The West Midlands is a hotbed of creative theatrical talent and activity and The Public are one of many venues helping promote over 30 shows.

Linda Saunders, Managing Director of The Public said: “Grisly Tales From Tumblewater received rave reviews when performed at Edinburgh Festival in 2011, appealing to both young and old audiences.  We’re really looking forward to being be part of Theatre Fever, helping celebrate the wonderful talent which resides in the region.”