Birmingham City Council have announced their intention to close Moseley Road Baths for swimming from 2015. 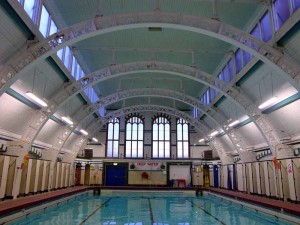 They were on the brink of submitting a bid to the Heritage Lottery Fund which for £3 million match funding would have secured the future of the building as a swimming facility for another 25 years, attracted £5 million investment and seen the Edwardian Grade II* listed building turned into a heritage attraction.

This bid was supported by councillors themselves, council officers, pool users, local schools, community groups and hundreds of local people who responded to the consultation.

Their decision not to invest in the facility at this crucial point and close the building to swimming could have the following impacts:

Now, the Friends of Moseley Road Baths have launched an on-line petition that supporters can sign at http://epetition.birmingham.public-i.tv/epetition_core/community/petition/2146.  This is important as it goes directly to Councillors and if enough signatures are forthcoming the city council will need to discuss it.

Yesterday members of the group braved the weather and lobbied the Hall Green Constituency meeting.

Jen, a Friends supporter, said: ‘We gave out leaflets and got names on petitions today. The councillors came out to talk to us but the message is the same – they will keep swimming at the baths “as long as possible” but it’s not in the long term plan. One thing that annoys me is the way each administration blames the last for the state of Moseley Rd Baths. Let’s keep the pressure on and send a loud clear message that We want to swim at Moseley Road baths’

The Friends will be gathering on Wednesday 30th January at 7:30pm at Anderton Park School Children’s Centre for a campaign strategy meeting.  Go along if you want to be involved in the nitty gritty of the campaign!