A festival of art, commerce and love celebrating Stirchley, Birmingham 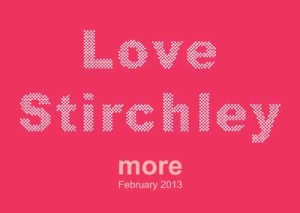 Over three evenings in February, community interest company Place Prospectors will provide an alternative Valentine’s experience with a series of events celebrating and demonstrating love which have been made for Stirchley and hosted by businesses there.

Building on the success of their ‘Stirchley Prospects’ project which ran from May 2011 to March 2012, Love Stirchley More will see a Stirchley-wide arts experience take over the area. Six local business partners will host temporary artworks, which will include visual and performance-based work delivered by a collaborative team of creative practitioners. The team will also work with residents and community groups as part of a number of the projects. Stirchley is primarily a residential area with a declining shopping street in desperate need of regeneration. The mini-festival aims to strengthen links between local businesses and the community and connect daytime and evening traders in the area.

What’s Love Got To Do With It? – Dancers and a choir made up of 100 people from the local community will process from Bournville Railway Station onto Stirchley’s High Street singing Tina Turner’s classic 1984 hit. The performance aims to reconnect the station (formerly known as Stirchley Street Station) to the high street and raise the profile of the connection to visitors and businesses.

The Love Seat – Young people often have to do their romancing outside of the home. For time immemorial, these expressions of young love have been carved into public objects such as trees and park benches as a symbol of ever-lasting love. A unique Love Seat will be made that will be decorated by Stirchley’s young people. The resulting piece will become a permanent bench in Stirchley Park.

It is hoped that Love Stirchley More will grow and become a regular event, a stepping stone towards becoming a bigger festival, harking back to the Stirchley Carnival which took place regularly up until 1939 and briefly resurrected in the 1980s.

The full Love Stirchley More programme will be announced in mid-January 2013.