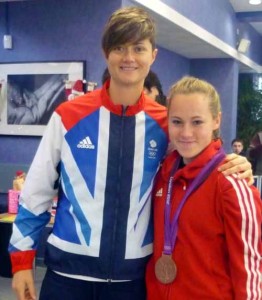 The 2012 Team GB bronze medallist, who lives in Solihull and has been capped more than a hundred times for England and Great Britain, launched the association’s annual Christmas Fair which raised £3,400.

Over 400 visitors were able to meet Sally and view her bronze medal, including Julie Whiting, Solihull School’s Hockey Team Captain and Wales International, whose ambitions include playing for Great Britain at Olympic level.

The 18-year-old had recently returned from the Champions Challenge 1 Tournament in Dublin where she played for the full Senior Wales side against Australia, Belgium and the USA. All three teams were made up of mostly Olympic squad players.

The fair, held in Solihull School’s Refectory and George Hill Building, was also attended by the Mayor and Mayoress of Solihull, Councillor Ken Hawkins and Mrs Janet Hawkins as well as the Joint Presidents of the Parents Association, Jonathan and Sally Ann Salmon.

Stall holders sold items ranging from handmade cakes to tea towels and mugs. Tombolas and raffles were also held, and visitors were able to buy time on a flight simulator the Parents Association bought for the School’s air cadets last year.

Sally Ann Salmon said: “We were delighted to welcome Sally and the Mayor and Mayoress. The event was a tremendous success and supremely well supported.”

Solihull School’s Parents Association raises money for the School, provides a social network, and helps parents that find themselves in hardship. Last year’s proceeds also went towards the costs of a racing kayak and portable floodlights.