As an art gallery owner, Lee Benson is well used to exhibiting the work of others. But now his own artwork has gone on display on the streets of Birmingham. 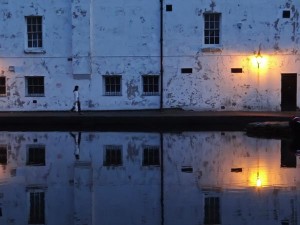 Photographs taken by Lee, who runs Number Nine The Gallery in the city, and his friend Dr Rob Galvin have been put on show around Brindleyplace.

The 24 prints, mounted on eight large display units, show artistic and unusual shots of Birmingham and the surrounding area. Many of the pictures were taken on and around the canals, where Rob lives on a narrow boat.

Among the images captured on camera are ducks swimming on the canal, winter wonderland scenes, a sunset over the Lickey Hills and landmark statues.

The outdoor exhibition, which was unveiled this week and will be on display into January, is a result of Lee and Rob setting up The Observationists, a group of Birmingham-based photographers “with a shared vision and a desire to create interesting, beautiful and positive images” of the city and its environs.

Rob, who turns 60 in January, is a marine biologist who lives on a boat in Gas Street Basin. A former international fisheries campaign coordinator with Greenpeace, he is also an ex-board member of Amnesty International. 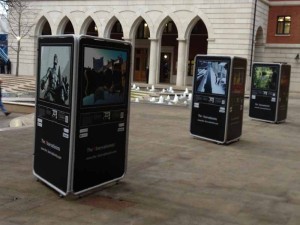 Lee, 56, has run Number Nine The Gallery in Brindleyplace for the past 14 years, showcasing the work of hundreds of artists, including Rolling Stone Ronnie Wood. Although a talented painter, this is the first time his work has gone on public display.

“We come from wildly differing backgrounds, but both Rob and I have experienced the full range of life’s adventures, and it is these experiences that have culminated in us wanting to make a difference through our photography,” explains Lee.

“The Observationists have a shared vision of how they see what’s in front of their eyes. The intention is not to take a picture, but to truly see the painting before them and only then to capture that image.

“The aim of the exhibition is to use positive, attractive and artistic images of Birmingham to illustrate the beauty of our city. By concentrating on the interplay between the old and new, we’ve highlighted the beauty of our canals and industrial heritage within the modern surroundings through which they meander today.

“Having showcased the work of hundreds of artists over the past 14 years, it’s quite strange – but also very satisfying – to see my own work on display.”