A host of legendary football names will be playing a charity match in honour of Stiliyan Petrov on Sunday. 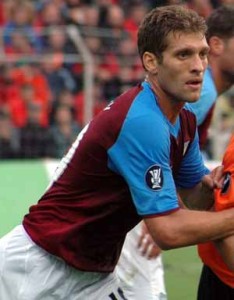 Friends of Aston Villa skipper Stiliyan Petrov are to host a huge charity match in his honour next month with every penny raised going to the Pedal for Petrov appeal on behalf of Leukaemia and Lymphoma Research (LLR).

The pals bought the match in a charity auction back in September at a dinner organised by Aston Villa for the Pedal appeal. The event saw the club’s two masseurs Alex Butler and Andy Smith cycle more than 400 miles to raise funds for LLR. They took to the saddle after learning that Villa skipper had been diagnosed with leukaemia and needed urgent treatment.

The auction prize, which went for £1,000, entitled the successful bidder to field a side against the Aston Villa Lions and Legends Association which features players from amongst others, the 1982 European Cup winning side. Villa fan Dean Dodds, who is now organising the match on Sunday November 18th as the Stan Petrov Select XI , said support had come from a host of sources including former Villa and England midfielder Gareth Barry, now with Manchester City, who will cheer on the team and former Villa star Lee Hendrie who has vowed to pull on his boots for the cause. Hendrie will line up for the Petrov XI even though it will mean playing against the legends he usually represents. Even Hendrie’s former Villa boss Ron Atkinson has provided a few coaching tips ahead of the big game.

The match kicks off at 1:30pm at Halesowen Town’s ground, The Grove in Old Hawne Lane and admission is £5 for adults and £2.50 for concessions. Gates open at 12 noon. Halesowen have donated the use of the ground for free and the day is aimed at football fans and families and will feature a pig roast and bar. Barry, who is still in regular contact with Petrov, said: “We are all good friends of Stan’s and what the lads are doing is great as it boosts the Pedal for Petrov and Leukaemia and Lymphoma Research appeal. I am looking forward to watching the game and cheering on the lads at what should be a great day out not just for Villa fans but football fans in general.”

Cathy Gilman, Chief Executive at Leukaemia & Lymphoma Research, said: “We are so grateful that the boys are supporting our life-saving work.

“The valuable funds they are raising will help us find better treatments and cures for patients with blood cancers including leukaemia, lymphoma and myeloma.”