A protest was held yesterday evening by the Save Walsall’s Green Spaces and Countryside Services Facebook Group. 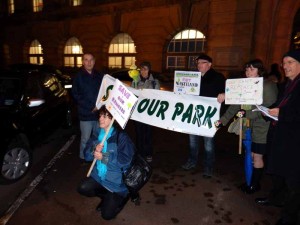 The Group, recently formed to celebrate and protect Walsall’s Green Spaces – threatened by a £400k cut in funding by Walsall Council under draft proposals recently published – met outside Walsall’s Council House to lobby, leaflet and talk to councillors prior to the full council meeting that was taking place.

Linda Mason, spokesperson for the group explained that, although the subject of cuts were not being debated at the meeting, it was important to keep the subject fresh in councillors minds and to remind them how much Walsall’s Green Spaces – and in particular the Countryside and Park Rangers – mean to the people of Walsall.

Around a dozen protestors engaged some councillors in conversation, who were generally felt to be supportive. Protesters outlined their particular concerns regarding a proposed cut in Ranger posts. Councillor Arif, representing St Matthews ward said “We are not cutting any Countryside Rangers”.

Cllr Arif’s quote is most welcome to the group who will continue with their campaign which includes an online petition – now signed by the largest number of people in Walsall Council’s e-petition history – and a web site.

The petition can be found here: https://walsall.cmis.uk.com/walsall/Petitions.aspx

Anyone wanting more information can email the group savewalsallsgreenspaces@gmail.com or check out the blog

http://savewalsallsgreenspaces.blogspot.co.uk/, which contains details of all the latest news in connection with the campaign.