This Christmas Coventry’s Belgrade Theatre welcomes the return of its annual B2 Xmas Show, which sees festive comedy musical, Crackers take to the B2 stage from Sat 8 to Sat 22 Dec. 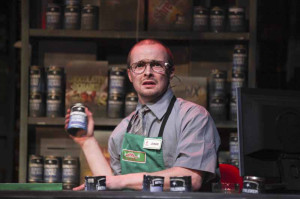 Crackers follows the story of the hapless young Leonard, played by Daniel Curtis, who finds himself trapped behind the checkout at cut-price Christmas shop Myrrh’s Bizarre Bazaar. He longs to escape, find true love and live his dreams, but his boss, the evil entrepreneur Archibald Myrrh, has other abominable plans.

Forbes said: “Crackers is a Christmas comedy musical sing-along psychopanto for grown-ups, with lots of stick in your head melodies, naughty, witty lyrics and a storyline that’s completely crazy. It’s packed with original, fantastic and funny songs and a hilariously irreverent script with extraordinary characters.”

In addition to writing, Forbes Masson has enjoyed a successful career on stage as a regular with the RSC since 2003 and a member of the company’s 2009-2011 core ensemble.

As ever, the B2 Xmas Show has been created especially for grown-ups and at just over an hour long, its perfect for office parties or for those wanting to enjoy a Christmas night out away from the kids.