Managers at National Express West Midlands are attending a special “Meet the Manager” session at the Queen Elizabeth Hospital next Tuesday between 10 a.m. and 4.00 p.m. to get passengers views on the services the firm provides. 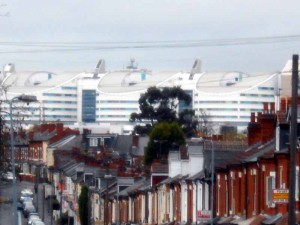 The session has been organised by the company, West Midlands Campaign for Better Transport and the University Hospitals Birmingham NHS Trust.

Earlier this year, West Midlands Campaign for Better Transport, the Roman Way Neighbourhood Tasking Group and the trust published a report, “Acute Action”, which identified a number of problems with bus service provision to the site and made a number of suggestions for improvements.   Already some of these have been met – an improved service is now being operated between the hospital and the city centre with a bus every 10 minutes, and passenger transport authority Centro is designing a new guide for visitors and patients to the hospital showing how to get there by bus.  NXWM also have new buses on order for service 99 with delivery scheduled just before Christmas.

Users are being encouraged to use this opportunity to deliver their suggestions and comments to the people responsible for operating the bus service.

Kevin Chapman of West Midlands Campaign for Better Transport said: “We are critical of bus companies when they get things wrong, but operators value customers’ feedback – good or bad.  NXWM have taken many of the comments in “Acute Action” on board that were raised by hospital staff, patients and visitors.

“NXWM are to be commended for agreeing to the ‘Meet the Manager’ event and allowing passengers to give further input into the local network and the service the company provides.”

UHB and WMCBT would like to see the formulation of a “partnership” between the various NHS Trusts, Birmingham City Council, Centro and bus companies to deliver a sustainable bus network and raise the quality of service to the site.  A similar arrangement operated at Addenbrookes Hospital in Cambridge saw a 20% growth in patronage and a reduction in traffic congestion around the site.

Hospital staff also requested additional journeys on service 76 on Sunday mornings, to enable those living in South Birmingham to get to the and from hospital by bus.   Centro have agreed to fund these journeys on a trial basis. From Sunday 25th November 2012 there will be buses on the 76 to the Q.E. from Station Road in Solihull Town Centre at 0627 and 0827 with departures back towards Kings Heath and Solihull from the Q.E. main entrance at 0740 and 0918.   The journeys will be operated by NXWM.

Chapman added: “These extra journeys on the 76 have been provided at the request of hospital staff but will be useful for other workers needing to travel early on a Sunday morning, for example those going towards Solihull.   However, as these services are being subsidised by Centro the message is “Use ‘em or Lose ‘em”.