A charity which supports both current and former armed services personnel is planning to hold a festive fundraiser in the run-up to Christmas and is inviting kind-hearted local people to join them for an enjoyable night out next month. 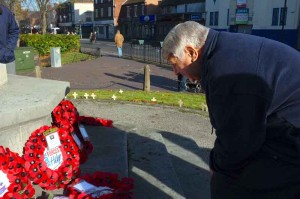 The very active West Midlands North Branch (Walsall District) of the Soldiers, Sailors, Airmen and Families Association (SSAFA) Forces Help – the national charity for those who serve in our Armed Forces, those who used to serve and their families – has organised a Charity Christmas Concert at St Batholomew’s Church in Wednesbury.

Featuring the talented and ever-popular Pelsall Ladies Choir, the musical evening will take place on Saturday, 1st December 2012 at the historic church on Little Hill, Wednesbury.

“To do this we need to raise funds, and anyone attending our Charity Christmas Concert at St Batholomew’s will have the pleasure not only of a very enjoyable start to the festive season but of knowing that they have contributed to important local work.”

The concert starts at 7.30pm and tickets cost just £5.

For further information or to book tickets, telephone the Walsall District branch of SSAFA Forces Help at Gordon House in Sutton Road on 01922 722778.