A talented fashion designer who set up a business with support from the University of Wolverhampton has won a prestigious award. 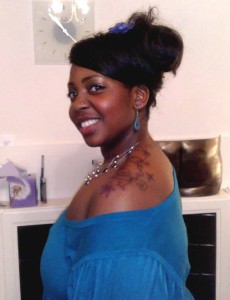 Her business, Catalyst by Tamara Joseph, received support from the University’s SPEED WM programme, which helps students to set up companies alongside their studies.

Since establishing her business, Tamara, who now lives in Nottingham, has gone from strength to strength and plans to showcase her collection as Paris Fashion Week in February.

Her latest accolade was for her ‘Unorthodox Couture Collection’ and the award was presented at a ceremony at the Botanical Gardens in Birmingham.

The 16 piece womenswear and menswear collection features Grecian style outfits inspired by the sequel Sex and the City film. It incorporates techniques such as prints and pleats which Tamara learned while studying for her Masters in Art and Design (Fashion and Textiles) at the University’s School of Art & Design.

Tamara said: “I wanted the collection to be spectacular, and I was ecstatic when I won. I kept saying that I wanted to win this but I went with an open mind so I wouldn’t be disappointed.

“SPEED WM was my platform and has enabled me to get to where I am today. It gave me confidence in my product and helped me to live the dream. I realised that nothing was unachievable and I am always aiming higher.

“I have drawn on the skills I learnt during my Masters in my latest collection, such as different dying techniques and pleating.”

Tamara was presented with a glass award by Gavin Douglas from the Young British Council, who has designed clothes for celebrities such as Kelly Rowland, and she will also be exhibiting her collection in the Great Western Arcade in Birmingham.

Tamara graduated from the University of Wolverhampton in April 2012 and now works as a Course Leader in Fashion at New College Nottingham in Nottingham.