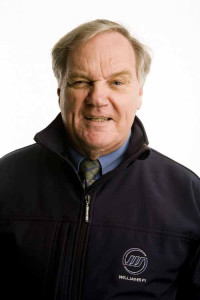 Head will speak about his experiences in the high-flying world of Grand Prix racing, and will give an insight into the sport’s cutting-edge technologies.

In particular he will talk about how the technical side of Formula One has evolved since he and Sir Frank Williams burst onto the scene in the late seventies.

The Williams F1 team’s first victory came in 1979 in only its second year, when the Ford-powered FW07 car – designed by Head and driven by Clay Regazzoni – came home ahead of the competition in the British Grand Prix.

Over the next 35 years Head was credited with introducing a number of revolutionary design concepts into the sport, with Williams taking nine constructors’ championship victories and seven drivers’ titles between 1980 and 1997 – a level of dominance never before seen in the sport.

The team’s darkest hour came at the 1994 San Marino Grand Prix, when superstar driver Ayrton Senna was killed whilst leading the race behind the wheel of a Williams. The Brazilian’s death prompted sweeping changes to the sport to improve safety, and no driver has lost his life in an F1 car since.

Head will give the free lecture in the Weston Lecture Theatre in the University’s new £55m Engineering and Computing building, which is behind the Lanchester Library on Gosford Street, city centre. The lecture will begin at 6pm.

Ashley Lees, head of the Department of Mechanical and Automotive Engineering, said: “Patrick is one of the most influential and pioneering engineers of this era, so it is appropriate that he should be delivering one of the first public lectures in our state-of-the-art new engineering facility.

“It’s an honour to have him as a guest, and I hope that our students and members of the public will enjoy the unique insight he’s able to give into such an exciting sport.”

To book a place at the lecture, visit www.eventsforce.net/bugatti2012.