Anti-privatisation campaigners have called on the candidates standing for election for the post of Police and Crime Commissioner to pledge not to privatise any policing service if elected. 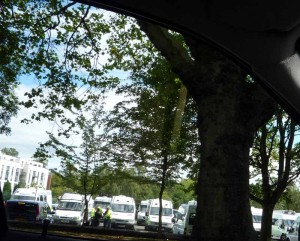 West Midlands against Policing for Profit will launch the pledge at a public meeting to be held on Thursday at Birmingham Council House.

All the current candidates including Bob Jones for Labour and Matt Bennett for the Conservatives have declared themselves opposed to the current Business Partnering for Profit programme.  The Business Partnering for Profit contract offered a lucrative potential contract of £1.5bn to private companies to provide policing functions including Custody and Forensic services.

The Campaign wants a clear commitment from the PCC candidates that they will oppose all future privatisation of policing services and will be asking them to sign a pledge. The two part pledge reads:

2.West Midlands Police Force will not contract with companies proven to have committed human rights abuses.’

The public meeting has been called by Birmingham Trades Union Council and will include speakers from the UNISON and UNITE representing the Police staff  affected and human rights campaigners including those concerned about the treatment of asylum seekers.

A spokesperson for West Midlands against Policing for Profit said: “We welcome the commitment of the candidates to stop the BPP programme. Some of the shortlisted Private companies have a poor track record in their treatment of vulnerable people in their care and custody. The loss of accountability through the privatisation of policing services has major implications for  civil and human rights.

We want the PCC candidates to declare their position in regards to any privatisation not just the Business Partnering Programme and will accordingly ask them to sign the ‘No Privatisation’ pledge.  Policing isn’t for profit, it’s a core function of the State and there is no room for the shareholder in that equation.”