When ex-Kingstanding author Ron Dawson was reading a copy of the British Legion Magazine the words ‘Lest we forget’ literally struck a chord within him. 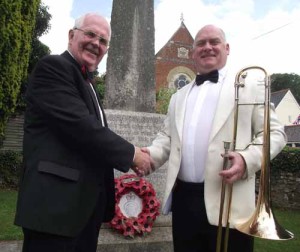 Ron was driven to begin writing the words and a basic melody of a song that would eventually be sung and played around the world.

Having little musical experience or skill Ron took his ‘song’ to his friend, Kevin Morgan Principal Trombonist with the Bournemouth Symphony Orchestra, who has composed music for two of Ron’s children’s books. Kevin liked what he heard and they worked together to compose ‘Lest we forget’, a song for Remembrance and Repatriation.

Now, only months later, choirs and bands across the UK and around the world are preparing to sing and play ‘Lest we Forget’ at concerts and festivals of Remembrance. Its premiere public performance will be in New Zealand. The Wellington Male Voice Choir is set to sing the song at New Zealand’s inauguration of an official Malayan Veterans’ Day on September 16th at the city’s war memorial and again later in the Parliament building. There are also advanced plans for performances in Canada and Cyprus in November.

The first public performance in the UK will take place in Dorset at a concert by the Dorset Police Male Voice choir on September 29th in Bournemouth. The concert is very appropriately in aid of the Pilgrim Bandits, a charity which supports service men and women who have lost limbs whilst on duty, many in Afghanistan. After that it’s being played and sung at Remembrance Services, Concerts and Festivals around the country – sadly, however, none as yet here in Ron’s home town of Birmingham. So, if there is any band or choir out there in the city who would like to perform it over the Remembrance period Ron will send the musical scores required free of charge.

The words of ‘Lest we Forget’  apply to all members of a family bereaved by war : mothers, fathers, sisters, brothers, indeed any who experience and live with such a loss and, equally, they apply to all branches of the armed services and to both male and female members, anywhere in the world. Ron summarises that ‘Grief knows no boundaries’.

Ron Dawson has a written a series of books for children: ‘Amazing Adventures of Scary Bones the Skeleton’.

Link to our article on this in April this year here