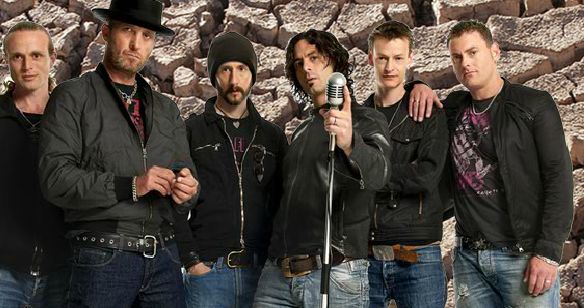 Slam Cartel are a new and interesting band whose debut album, Handful of Dreams, was released last year. They’re firmly rooted in the classic rock end of the market although there’s far more to them than pale Bon Jovi impersonators. We talked to keyboard player and lyricist Adam Lee about their music and outlook on life, beginning with the public reaction to Handful of Dreams and the singles which have been released from it.

“It’s been great. We’re very pleased with how it sounds, it’s had a lot of radio play and many people have got into it via that.”

Adam had a somewhat unconventional upbringing, with his early life being shared between the UK, Denmark, Greece and the Netherlands. He also had a father who was a musician; “That’s right. My dad could always play any sort of instrument by intuition, he could pick anything up and get a tune out of it.”

As a result of this background it’s hardly a surprise that Adam’s musical influences are equally widespread, citing Ella Fitzgerald, Vangelis and Status Quo amongst many others. Does this lead to conflicts with more straightforward rockist colleagues?

“Not at all. We’ve all got our own backgrounds and I respect that. There will always be debate about whether what we’re doing is true rock’n’roll but we all accept that and enjoy it. Every one of us brings different things to the band and that’s what gives us an edge.  We’ve got a wide range of influences, but basically if it sounds good it doesn’t matter what the label is.”

Listening to the album, those wide influences can be heard – a cover of Talking Heads’ Once in a Lifetime, some definite Sabbath riffs, a bit of Pink Floyd and a real Nirvana/Foo Fighters edge to other songs. “There’s a lot of influences in there, and they come out in the listening. If some new music sounds familiar, listeners will relate to it. Everyone who ever makes music is influenced by something that’s already gone before and it all comes together in what you’re doing. For example, I never had a massive love of rock before I joined the band but playing with them has really opened my eyes and I love to rock out now, especially on stage. Equally I’ve added my influences to them and given the music an extra dimension.”

Talking of labels, how would you describe your music?

“Balls out rock, basically. Can I say that? It’s loud and we love to rock out. We’re a straightforward rock band.”

It’s the type of music that’s also been described as escapist – long-legged girls driving down the rock’n’roll highway sort of stuff. Would you say that was accurate, and is it a compliment?

“Definitely on both counts. I can listen to our album while I’m driving and be tapping the steering wheel, forgetting the traffic and everything else. Music is a form of escapism and a form of relief. People can understand that.”

Slam Cartel play the Roadhouse, Cotteridge on 27th September. Handful of Dreams is available on CD and MP3 download.