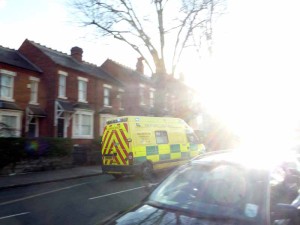 For many youngsters across the region, this is not one of the better weeks in their lives as they return to school after the long summer holidays. For motorists particularly, it means a return to busier roads and lots of youngsters about at rush hour for the first time in six weeks.

West Midland Ambulance Service is reminding everyone that this combination can often spell increased danger on the road. Assistant Chief Ambulance Officer, Tracey Morrell, said: “The last thing we want to do is appear like the nanny state, but the reality is that we often see a rise in the number of youngsters injured in the first few weeks of the new school year.

“We’ve all been enjoying the quieter roads on our journeys to and from work.  You now probably need to factor extra time into your commute so that you aren’t left rushing to try and get there on time putting yourself and other road users at risk.”

She also had this warning for children. “With them as good as wedded to their music, phones and the like, they often aren’t as aware of cars as we’d hope they would be, especially as they re-new friendships and talk about their holiday adventures. There will also be squads of youngsters riding to school for the first time. We’d ask drivers to be mindful as some may not be accustomed to riding in traffic.

“We’d urge all parents to ensure that their kids wear a properly fitted helmet and learn the skills to ride safely.  Equally, make sure they have the appropriate reflective items for when it gets dark.  Both motorists and cyclists need to respect each other. A little common sense should keep everyone safe and mean no-one has to meet our staff!”